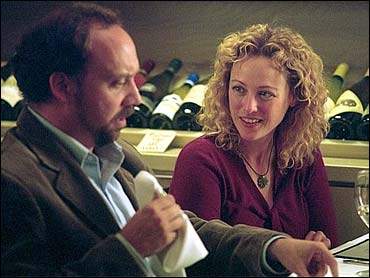 Alexander Payne won the directing honor for "Sideways," while he and writing partner Jim Taylor shared the screenplay award. "Sideways" also won the Oscar for its screenplay Sunday night.

Giamatti, who stars as a sad-sack who finds the possibility of new love during a wine-tasting road trip with a buddy, earned the lead-actor prize at the awards, which honor films at least partly financed outside the Hollywood studio system.

Catalina Sandino Moreno won best actress for "Maria Full of Grace," in which she plays a Colombian woman thrust into danger when she signs on to smuggle heroin into the United States. The role also earned Moreno a best-actress nomination at Sunday's Academy Awards.

Supporting honors went to Madsen as a wine enthusiast who becomes Giamatti's romantic interest and Church as his randy pal, who's out for one last fling before his wedding. Madsen and Church also received Oscar nominations.

"Garden State," a romantic comedy written and directed by Zach Braff, who also stars in it, was honored as best picture by a first-time filmmaker. "Maria Full of Grace" writer-director Joshua Marston won for best first screenplay.

Winners were chosen by the 9,000-member nonprofit Independent Feature Project/Los Angeles, which includes actors, directors, writers and other industry professionals.