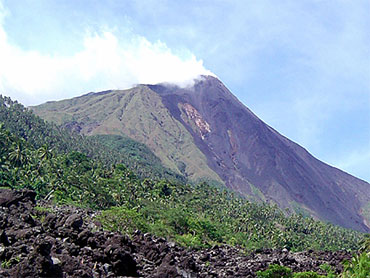 One of Indonesia's most active volcanos erupted Friday, sending lava and a searing gas cloud tumbling down its slopes. At least four family members were swept away and feared dead, officials said, and several others were badly hurt.

"It happened so fast," said Surono, the director of the volcanology and mitigation agency. "There was no time for an evacuation."

Ash and lava crashed down the mountain's western slope, destroying at least nine houses, a church and a school, said Priyadi Kardono, an official with the national disaster management agency. A road and a bridge also were badly damaged, leaving more than 2,000 people in the remote area completely isolated.

Kardono said four family members were missing and feared dead. Five others were hospitalized, one in critical condition.

Authorities were trying to evacuate residents living in at least one nearby village, said Tony Supit, a district chief.

Indonesia, the world's largest archipelago, is located on the so-called Pacific "Ring of Fire," an arc of volcanos and fault lines encircling the Pacific Basin.