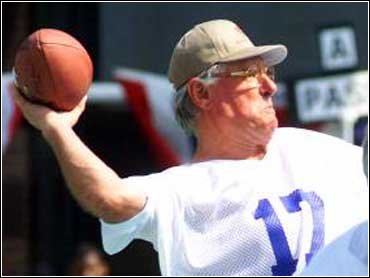 College football must become less business oriented and start to do more to help student athletes, enshrinees to the College Football Hall of Fame said Saturday.

The enshrinees criticized everything from the financial help student athletes receive to the way college football has become commercialized.

John Hannah, who played at Alabama from 1970-72 and was chosen the best lineman of all time by Sports Illustrated in 1981, started the discussion when he said football in general was becoming too commercial.

"I love the game," he said. "One of the things I hate about today, and I'm going to use this as a bully pulpit, is the fact that it is now run by businessmen who have taken the game away from us. To see people commercialize it to the point where they take the passion away from the game is demoralizing."

Bill Kilmer, a single-wing tailback at UCLA who led the nation in total offense in 1960, was more direct, saying: "I think the NCAA has had a lot to do with the problems of college football today."

Kilmer, who took the Washington Redskins to the Super Bowl, said NCAA rules prevent coaches and colleges from helping players in need.

"When a coach goes and recruits in a little town in Georgia or wherever, he sees the way these kids live," he said. "And then their mother gets sick or something happens and they can't give them enough money to get home on on a plane trip or a bus ride, and when he does, the NCAA puts him on a two- or three-year ban. I think it's horrible."

With the millions of dollars the NCAA takes in on bowl games and television contracts, it should give some of it to football players, Kilmer said.

Herschel Walker, the Heisman Trophy winner in 1982, criticized the NFL for taking too many underclassmen in the draft, even though he left school after his junior season to play in the USFL.

Walker said he's talked to Gene Upshaw, executive director of the NFL Players Association, about forcing NFL teams to pay for the tuition of underclassmen they select in the draft who don't make the team.

"You can't take an education away from a young man and put him on the street with no money," he said. "We should make the team responsible for sending him back to college."

The players spoke at a news conference Saturday where those who did not give speeches during Friday night's enshrinement dinner were allowed to speak. Among the 22 players enshrined were California's Ed White, Iowa's Chuck Long, Arkansas' Chuck Dicus and Texas' Chris Gilbert.

One of the most moving speeches was by Frank Loria Jr. on behalf of his father, who was killed along with the entire Marshall football team when their plane crashed in November 1970.

"That plane crash is an important part of college football history," said Loria, 29, who was born 1 1/2 months after the crash. "Those who were on it must not be forgotten, not so much for the sadness and grief the memory can bring, but because in that sadness there is hope. I think we can and should all look at our own lives and realize that although life can be short some times, we do have a lot to be thankful for."

Loria, the offensive coordinator at Marshall, was a defensive back at Virginia Tech from 1965-67, playing on the team with current Hokies coach Frank Beamer. Beamer said in a telephone interview that although small, Loria was an extremely hard hitter.

"When he hit people it was like a karate chop," he said. "He just stung them and they just stopped dead in their tracks."