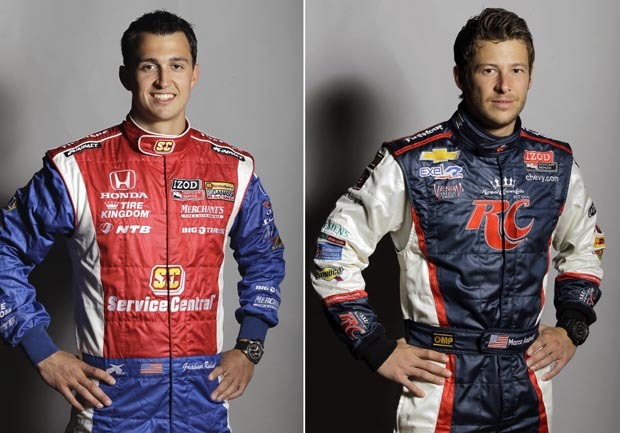 (AP) INDIANAPOLIS - The Indianapolis 500 will be run on Sunday in what's believed to be the most wide-open race in years. There are no clear favorites and there's a group of new faces vying for attention. And with no Danica Patrick, there's a chance for some new stars to be born in the Greatest Spectacle in Racing.

The late Dan Wheldon will be honored throughout the weekend, and the absence of the two-time winner and defending champion will be felt long after the checkered flag drops.

A quick look at the big questions at Indy:

WHO WILL WIN? The front two rows for the start of the race are stacked with drivers from Penske Racing and Andretti Autosport, so it could very well be a shootout between those six guys. Penske has Ryan Briscoe on the pole, with Will Power and three-time race winner Helio Castroneves in the second row. Andretti has spots two through four with James Hinchcliffe and Ryan Hunter-Reay on the front row, and Marco Andretti in the second row. The nod should go to a Penske driver, though: The team is undefeated so far this season, with four wins and five poles.

CAN AN AMERICAN WIN? It's quite possible it will be a red, white and blue celebration for the first time since Sam Hornish Jr.'s 2006 victory. Although the nine Americans in the field matches 2010 for the fewest in race history, the group racing Sunday is solid. JR Hildebrand nearly won the race as a rookie last season, but crashed coming out of the final turn while leading. Marco Andretti has had several near-misses, and has been fast at practice. Josef Newgarden, a 21-year-old rookie driving for American owner Sarah Fisher, has been the surprise, making the top-three on the speed charts in several practice sessions.

DOES CHEVROLET HAVE A CLEAR ADVANTAGE? It sure looks that way, and has all season. Chevys have won all four races this year with Penske drivers, making it a very successful return to IndyCar after a six-year absence from the series. Over Chevrolet's objections, IndyCar allowed Honda to use a new compressor cover on its turbocharger, but Chevys took nine of the top 10 spots in qualifying.

DANICA IS GONE? Yes, Danica Patrick will race in NASCAR's Coca-Cola 600 on Sunday night. But this field still has plenty of appeal. Four-time series champion Dario Franchitti has been overlooked for his accomplishments, which include two Indy 500 victories. And Will Power is the most dominant driver in the series, yet is not appreciated for his feats. But this month has brought attention to two new faces: Patrick's replacement, James Hinchcliffe, and rookie Josef Newgarden. Both are young, charismatic and capable of winning.

WHAT'S THE DEAL WITH THOSE SLOW CARS? Those are the Lotus cars, and their entry into IndyCar this season has been nothing short of embarrassing. The manufacturer is behind, strapped for cash, and not at all competitive. In the past month, three teams have bolted. Worse, there may be a potential safety hazard. Lotus drivers Simona de Silvestro and Jean Alesi have struggled to maintain a reasonable pace. Alesi, a 47-year-old former Formula One driver making his first start on an oval, even said he felt "unsafe" in the car and was "concerned" about other drivers having to maneuver around his slow Dallara. Should that be the case once the race goes green, IndyCar will have a responsibility to park — black flag — the two Lotus drivers.

WILL RAHAL, ANDRETTI RIVALRY TAKE CENTER STAGE? Marco Andretti fist-bumped Graham Rahal on his way out of an Indianapolis 500 promotional event, a much friendlier encounter than their bump on the track at Long Beach last month. The two young drivers with the famous racing names don't want to be too civil, though. They know their rivalry is good for a sport craving attention and they are happy to talk it up. "I've got the ultimate respect for him, and I'd say it goes both ways," Rahal said Monday. "Of course, we clashed at Long Beach, and I can guarantee it's not going to be the last time. There's always going to be two sides to the story. I still don't agree with what happened, but that's the way these things go."

WILL DAN WHELDON BE REMEMBERED? Last year's winner was killed in an accident in the October season finale, and the track has many special tributes planned for the popular two-time champion. His wife, Susie, will participate in Saturday's drivers meeting, and will attend various events this weekend with her two young sons. Wheldon's race-winning car has been on display, and car owner Bryan Herta will drive it for a ceremonial lap before the race. Fans will also be given white sunglasses — Wheldon's preference — to wear during tributes on the parade lap, lap 26 and lap 98, which recognize the numbers of his winning cars.