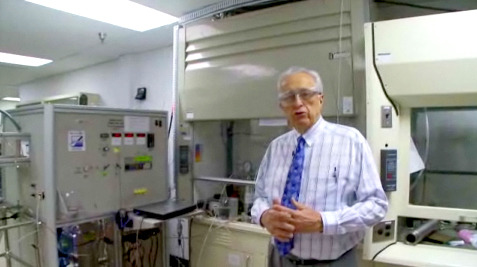 Researchers say that a dry, inhalable vaccine developed for measles prevention may also help pave the way for the inexpensive treatment of a range of other illnesses.

More immediately, news of the vaccine should be especially welcomed by less-developed nations, where there is more limited access to medical care. Indeed, measles caused an estimated 164,000 deaths in children worldwide in 2008 - 2/3 of that number coming from India, alone.

The process developed by a team of researchers at the University of Colorado at Boulder, basically involves taking a deep breath from the inhalable powdered vaccine - which gets sent straight into a recipient's lungs. Here's a short video explaining how the vaccine works.

Professor Robert Sievers, who led the research time, which developed the vaccine after five years of work, said that needles and syringes frighten some people who would otherwise benefit from treatment. Also, he noted that the unsafe use of needles can foster transmission of diseases under the wrong circumstances.

"It's not just that needles are scary to some but they also have the potential to become disease transmitters in poor counties when people reuse them," he said in an interview with CBSNews.com. He added that problems can crop up when there is inadequate access to clean water and storage. "What happens is that people have to use [the vaccine] in the same day and when it's in liquid form, it can get contaminated in the warm climate of India. So, when someone uses it later in the day, they can get infected; sometimes it can be fatal."

Sievers said his team is now looking at creating a lozenge version of the measles vaccine, "something like breath mint that you put underneath the tongue."

In the future, the technology might have application in the search for effective, less expensive ways to treat human papilloma virus, a sexually transmitted disease that causes cervical cancer. Current treatment for three doses costs $300.

"With every new vaccine that comes along, there has to be a learning period when manufacturers try to make it less expensively and recoup their costs in research and development," according to Sievers. "But if we could make a treatment [for the human papilloma virus] in an easy-to-deliver form and at a lot lower cost, there would be a lot interest in that. It costs more than $300 and that's out of the question for a large percentage of poor villagers in Africa or India."