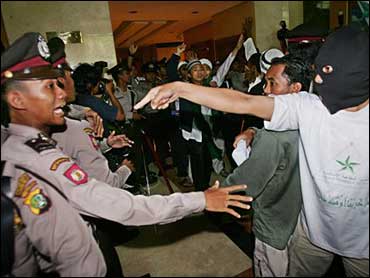 The Vancouver Canucks, still trying to unload Pavel Bure, will be without their other Russian star for four to six weeks after Alexander Mogilny sprained his right medial collateral ligament in Saturday's 4-2 loss to the Detroit Red Wings.

Mogilny was injured five minutes into the first period when he collided with Detroit winger Martin Lapointe.

The 29-year-old Mogilny was off to a solid start, ranking second on the team in scoring with four goals and 13 assists in 19 games.

"He's a huge part of our team," said captain Mark Messier. "He plays a lot in every situation. I think he's one of the best players in the league."

Mogilny and Messier have been linemates most of the season. Todd Bertuzzi was enjoying success as the unit's left wing before going down with a fractured tibia on Nov. 1. He is expected to miss another three or four weeks.

"Already having Bertuzzi out and now Alex, our two best players, it's a tough loss. But that's the way it goes," Messier said. "We can't sit here and hang our heads and use it as an excuse. If anything, we have to dig in our heels more and use it as an incentive to play harder."

Bure, who was third in the NHL in scoring last season, has sat out the entire season after announcing in August he would no longer play for the Canucks. General manager Brian Burke has been trying to trade the speedy winger, who was suspended in September for failing to report to training camp.