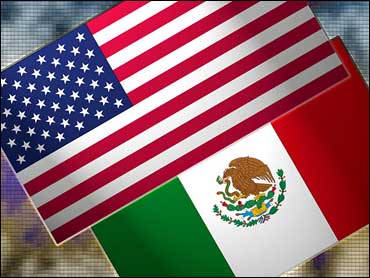 Garza's customers can write checks, get a mortgage and deposit or withdraw money at branches or ATMs on either side of the border. And they can easily transfer funds from the U.S. to relatives in Mexico, eliminating a need for costly money-wiring services.

In the midst of a growth spurt that is pumping money into the region from both sides of the border, the Rio Grande Valley is becoming something of an international banking Mecca.

Deposits in the Valley have more than doubled to about $10.2 billion between 1994 and 2004, according to the most recent data available. Bankers such as Garza are scrambling for a share.

Banking giant Banorte, which recently acquired Garza's Inter National Bank, is the first Mexican financial institution to offer branch access in the U.S. Other high-profile banking forays into the Texas border region are under way.

Spain's second largest bank, Banco Bilbao Vizcaya Argentaria, which owns Mexican banking giant Bancomer, is entering the U.S. market with a takeover of Texas State, which started in McAllen and has spread throughout Texas.

"We looked at Texas State because of synergies that we could get with Mexico on the border," BBVA spokeswoman Julissa Bonfante said.

Earlier in the year, San Antonio-based Cullen/Frost Bankers Inc. wedged its way into the area by purchasing Alamo Bank of Texas and its 15 Rio Grande Valley branches.

Industry experts and outside analysts say the fervor is natural. McAllen, and Brownsville to the east, are hubs of a binational region growing fast in the wake of the North American Free Trade Agreement.

While poverty remains rampant, the Texas side continues to groom itself as a spending playground for millionaires from Monterrey, Northern Mexico's industrial powerhouse.

"When you look at our bank deposits they're very, very big relative to any location, relative to our population, our socioeconomics," said Cynthia Brown, an economist at the University of Texas-Pan American. "The reason we have this is not because of who's banking here, people who live here, but because of people banking out of Mexico. ... Now what Banorte, a Mexican bank, is saying, is 'hey, we want a piece of this action too.' "

Garza speaks with a sort of deference as he walks past some of the customers on the bank's sixth and highest floor — they are international banking customers and discretion is paramount.

But as evidenced by the steady flow of customers making smaller transactions on the ground floor, there's more than Mexican millionaires driving the banking boom.

The Rio Grande Valley has managed to diversify from its former agriculture base and is surviving the loss of clothing mills by embracing retail, staffing call centers, and cultivating a support role for the factory complexes across the border.

Explosive population growth (large families, continuing influx of new immigrants, as well as job seekers and entrepreneurs coming and settling from other parts of the country) has created a construction frenzy.

And there's increasing evidence of a growing middle class in Mexico, who are following the example of the upper class and taking their pesos to McAllen, Brownsville, and the beaches of South Padre Island.

"The Valley is probably what the Dallas-Fort Worth area was 25, 30 years ago," said Raymond Jenkins, the chairman of Frost Bank's new Valley region. "Large growth rates, very young citizenship. ... It's kind of the last frontier. When I got into banking in 1976, there were really only three banks in McAllen. Now there's 18, 19 banks with about 70 branches — and that's inside the city limits."

Ford Sasser, president of Rio Bank, said the region's ties with Mexico meant it couldn't be compared fairly with other parts of America. When the Mexican peso devaluated in the 1980s, the Valley suffered even as the economy elsewhere grew. And as real estate prices peak and plummet elsewhere, new arrivals from places such as California and Florida are a decade behind Mexicans in discovering the deep South Texas housing market.

"It's been a pretty easy ride with the appreciation in real estate values," Sasser said. "When your collateral is worth more a year from now than it is today it's kind of hard to make lending mistakes."

He said fears of a leftist takeover in the Mexican presidency helped the market, as many Mexican investors looked at valley real estate as a hedge on their pesos.

"It was real close to having a person be elected down there that could have certainly had a big impact on the Mexican economy," he said. "The only people to get hurt in a peso devaluation are the people with pesos."

There are more than a dozen banks on South Padre Island, a three-mile strip of condominiums and hotels with only about 2,400 year-round residents.

"I think the real estate opportunities here on the island are certainly a compelling reason to locate here," said Roxanne Guenzel, president of the South Padre Island Chamber of Commerce.

More banks want a piece of that cross-border mortgage action.

Besides marketing to Mexicans buying up real estate in the Valley, they can also woo Americans shopping for coastal property in Mexico.

"The American that wants to own real estate in Baja California, the Pacific Coast, that's just a huge market," Inter National's Garza said. "The market is becoming a lot more like in the U.S."
By LYNN BREZOSKY