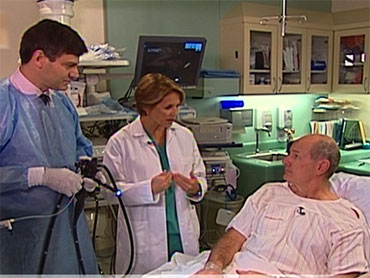 But how is a colonoscopy really done?

Dr. Mark Pochapin, director of The Jay Monahan Center for Gastrointestinal Health, said patients first receive instructions from the doctor to clean out the colon.

He told CBS News, "Read (directions from your doctor) carefully a few days ahead of time, since you may need to shop for special supplies and get laxatives from a pharmacy. If you are not sure about any of the instructions, call the doctor's office and go over them step by step with the nurse. Many people consider the bowel preparation -- often called the "bowel prep" -- the most unpleasant part of the test."

He said patients follow a special diet the day before the exam and take very strong laxatives before the procedure. He added some people may also need enemas to clean out the colon.

Pochapin said, "The key to getting good pictures is to have the colon cleaned out."

Next, Pochapin said, patients will actually receive the colonoscopy. To start, doctors use a flexible camera called a colonoscope, a long, flexible instrument about 1/2 inch in diameter to view the lining of the colon. The colonoscope is inserted into the rectum and advanced through the large intestine. If necessary during a colonoscopy, small amounts of tissue called polyps can be removed for a biopsy analysis and may be identified and entirely removed.

With this capability, Pochapin said, a colonoscopy allows accurate diagnosis and treatment of colorectal problems without the need for a major operation.

"(The colonoscopy) is diagnostic and therapeutic," Pochapin explained. "You can remove the polyp and prevent it from having a chance of becoming cancerous."

Pochapin demonstrated on Smith's arm how the camera can magnify very small objects. Viewers could clearly discern the follicles on his arm. A similar magnifying effect will occur during Smith's colonoscopy.

Pochapin explained colorectal cancer is the second-leading cause of cancer death in the United States in men and women combined, killing nearly 50,000 people each year, according to the American Cancer Society (ACS). Last year, the ACS estimated 146,970 people will be diagnosed with colorectal cancer in the U.S.

MYTH: Only really old people get colorectal cancer.
FACT: About 91 percent of colorectal cancers occur in people 50 or older, and the risk does increase with advancing age. However, younger people can also get this disease.

MYTH: If you do not have any symptoms, if or you do not feel sick, you do not need to worry about colon cancer.
FACT: Pre-cancerous polyps and early colon cancers often cause no symptoms. So, you can have this disease and not even know it. This is why screening is so important, and why it is done before any symptoms occur. (If you do have symptoms, see your gastroenterologist right away for examination and diagnosis.)

MYTH: A colonoscopy is painful.
FACT: A colonoscopy should not be painful. People need to make sure they have a physician who is trained and experienced in colonoscopy, to ensure a high-quality procedure.

For people who cannot or do not want to have a colonoscopy, other screening tests are available. Ask your doctor which screening test is right for you.