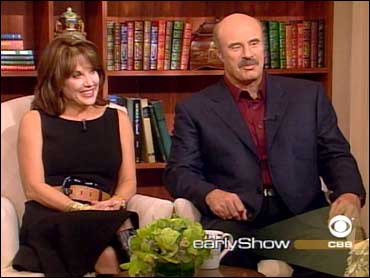 Yesterday, Dr. Phil McGraw and his wife, Robin, appeared on The Early Show to discuss Dr. Phil's new approach on his talk show, where he dispenses advice to families and individuals in crisis.

Now, the tide is turning somewhat for the McGraws as Robin offers words of wisdom to women in a new book, "Inside My Heart: Choosing to Live with Passion and Purpose."

"When I sat down and read this book, I was inspired by ... I mean, it's kind of a call to arms," Phil McGraw told The Early Show co-anchor Rene Syler. "Women, make some clear choices, take care of yourself. It's not selfish. We all need to do a more active job of making the right choices."

Both Robin and Phil McGraw grew up with alcoholic fathers and know what it is like to feel like they are not in control of their lives. Robin McGraw said she grew up very poor and in constant fear that her father would gamble what little money the family had. Meanwhile, she said her mother dedicated her life to her children and husband, sacrificing her own health.

In her book she tells women to become active participants in their lives and make their own well-being a priority — something she said her mother rarely did.

"At times we wake up and react to what comes our way rather than waking up with a plan and a purpose and making a decision about what we want to do and what we need to do to have the life we want to live," she said. "So I do encourage women to look inside themselves and find out what it is they need in their life that makes them happy and makes them enjoy life more."

Phil McGraw said that before they were married, he realized just how in control of her life his future wife was. They had been dating for a number of years and Robin decided that it was time to take the relationship to the next level — marriage. But Phil was not ready.

"You know, and I knew what I wanted," Robin McGraw said. "I knew what he needed. He just didn't know it right then."

Today, they have been married for 30 years and Robin McGraw says the secret is simple: "I got a really good man who will listen to me."

To read an excerpt of "Inside My Heart" click here.