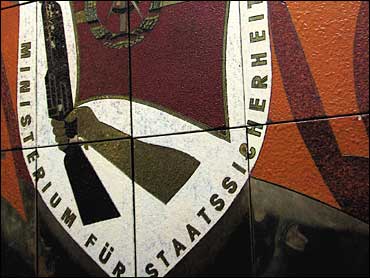 Throughout the 1980s, Michael Beleites led an Orwellian life constrained from all sides. He studies at university were cut off abruptly and he was prohibited from traveling outside his country, East Germany, which is also known also as the GDR. Professional efforts seemed pointless, because he would never be promoted. It was the life of an energetic, motivated young man -- but it came to look like the life of a deadbeat.

This was life as dictated by East Germany's Ministry for State Security, the Staatssicherheitsdienst, known as the Stasi.

Beleites, for his part, was engaged in subtle activism and was part of the quiet revolution within the GDR in the lead-up to the fall of the Berlin Wall in 1989. As an environmental activist - one of the subtle ways of jabbing the government without actually insulting it (which was absolutely verboten) - he was monitored by the Stasi through acquaintances who were citizen informers. His punishments, such as the travel restriction, were determined in secret by the Stasi, Beleites says.

He knows because he has read a detailed account of the Stasi's plan for him - in his own Stasi file. He was the first East German to read his file after they were opened to the public by a sudden and sweeping Federal Republic order in 1992.

The move came after two years of debate over what would happen to the fledgling democracy if the Pandora's Box of files was opened. Since there's been a tidal wave of requests to review the files, which name informants. In some cases, sophisticated technology is being used to reassemble torn documents.

The Stasi considered itself the "sword and shield" of East Germany's ruling Socialist Unity Party. It has been compared to the Nazi Gestapo, but was more pervasive. The Gestapo had 40,000 officials for a population of 80 million; the Stasi was comprised of nearly three times the number of officials - not counting citizen informants - controlling a population a quarter of that size. They thoroughly infiltrated churches, schools, hospitals and universities. The Stasi files are a product of four decades of meticulous notetaking.

Now the Stasi files are part of Beleites' daily life. He is the German state of Saxony's national representative for Stasi documents from the former GDR.

It has been 15 years since Beleites opened his file - and since an estimated six million East Germans who had been imprisoned, interrogated or spied on by the Stasi have first had access to theirs. That's just fifteen years since an estimated one-third of the population could begin learning the identities of their oppressors. Neighbors, co-workers and friends began finding out who had turned on whom.

Writer Timothy Garton Ash, who lived in East Germany in the late 70s, recently discovered he had a Stasi file. He read its contents and used it to track down the acquaintances who had spied on him, as well as the Stasi officers in charge of his case. All but one agreed to talk with him.

By 1988, the Stasi employed 170,000 informers and nearly 100,000 full-time ministry workers. There is a significant population in Eastern Germany that is former Stasi. Despite the poignant story of a sympathetic Stasi agent in Florian Henckel von Donnersmarck's Oscar-winning film "The Lives of Others," "human" does not always equal "good." East Germans are brutally aware of this.

As Garton Ash put it in his book, The File: "having a Stasi past is like having AIDS.''

These individuals are made to explain their history and motivations and repentance upon application for almost any job. They are gossiped about and those with prominent Stasi roles are generally held back from government posts. It is a strange reversal of fortunes for nearly one in every 50 adults in the East.

Beleites has met several such former conspirators, those who worked on his case and showed up in his file. He said while those who were Stasi officers or "the masterminds" were willing to have a discussion with Beleites, those who were acquaintances who are listed in his file as having collaborated with the secret police "denied it and still do today."

Citizens are still opening their Stasi files for the first time to see the toxic stain the Stasi left on their personal history.

In 1999, Johannes Legner, a senior official at the government commission that oversees the files told the Associated Press: "Applications to see Stasi files are rising sharply and now run at 15,000 a month from individuals."

A mass Vergangenheitsbewältigung - a distinctly German word meaning coming to terms with the past - is still underway.

"It's the same story as in 1945: partial amnesia is followed by awakening," Legner said. "I believe the real wave of interest and generational conflict are still to come."

For the government, keeping these files is a massive undertaking. The Stasi is estimated to have kept files on up to six million East Germans - files that together would stretch more than 110 miles. That's longer than the Berlin Wall.

And some have not opened their file at all. In some cases, they don't want to know what it contains. Others are still waiting for files that are being organized or recovered.

More files are becoming available each day. A massive reconstruction effort is underway to reassemble 45 million documents shredded and torn by hand by the Stasi upon order from chief Erich Mielke when the eminent collapse of the regime became evident in 1989. Some were thrown in a shredder, others turned to paper-mache mush with water. But the ones torn by hand remain in 16,000 big sacks.

This year a computer software program was put in charge of putting together the torn documents - by analyzing the digital fragments' typefaces, stamps, markings and paper type. Without computers, this effort would have, by one estimate, taken 30 workers 400 years to piece back together these sensitive files that the Stasi chose to destroy first.

Now these files could be reassembled in five years, which would mark 20 years since the opening of the Stasi files.

At the official launch of the project, a member of the German Bundestag named Klaus Peter Willsch said: "Only by honoring the truth can we honor those whom the communists killed, tortured, innocently incarcerated and denied their chances in life."

Computer-aided Vergangenheitsbewältigung? It is indeed a new era in eastern Germany.