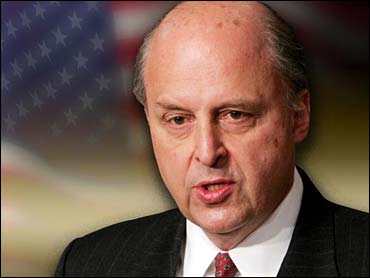 John Negroponte, President Bush's choice as the first director of all U.S. intelligence activities, told senators Tuesday that reforming the various spy agencies will be a central focus of his new job.

At his confirmation hearing before the Senate Intelligence Committee, Negroponte declined to specify what he will do about changes recommended by recent commissions that have been critical of U.S. intelligence-gathering, however. He said he is still studying their findings.

"Our intelligence effort has to generate better results," Negroponte, a veteran of the diplomatic establishment and most recently Bush's ambassador to Iraq, said in his prepared remarks. "That's my mandate, plain and simple."

"The focus of the Senate nomination hearing for Ambassador Negroponte to be national intelligence chief was 'how to avoid another 9/11'" said CBS News Foreign Affairs Analyst Pamela Falk. "But Committee members took the opportunity during what was Negroponte's seventh set of confirmation hearings to cover almost two dozen issues including human intelligence, partisan analysis of information, the colossal failure of weapons of mass destruction (WMD) intelligence in Iraq to his time in Honduras."

Negroponte, whose approval by the committee and the full Senate are not in doubt, fended off Democratic suggestions that he may not be an impartial arbiter of intelligence. To make their point, Democrats turned to his record as ambassador to Honduras during the tumult in Latin American during the 1980s.

"My punch line is, I believe in calling things the way I see them, and I believe that the president deserves from his director of national intelligence and from the intelligence community unvarnished truth," Negroponte told the panel.

Negroponte told the senators that he will insist that all 15 intelligence agencies start working together and that he will have the authority to stop the feuding between the Pentagon, CIA and other agencies, reports CBS News Correspondent Bob Fuss.

Yet Negroponte also said he believes intelligence has limits.

"But even if we cannot know every fact or predict every threat, by working more closely and effectively as a team, we can be more specific about what we do not know, and that is critical," he said, later noting the need for a "single intelligence community that cooperates seamlessly."

Negroponte's comments directly addressed recent failures, in which the intelligence community overstated the threat posed by Iraq in the run-up to the 2003 invasion, was unable to prevent the terror attacks of Sept. 11, 2001, and has been repeatedly criticized for bureaucratic infighting.

"Charged with coordinating fifteen intelligence agencies with an estimated budget of $40 billion, the senators questioning Negroponte seemed to reflect the skepticism both parties have expressed about the new agency but appeared reassured by the tough assignments that Negroponte has handled in the past," said Falk.

But some of the most heated criticism involved his record 20 years ago as ambassador to Honduras from 1981 to 1985. Human rights groups have alleged that Negroponte acquiesced in abuses by Honduran death squads funded and partly trained by the CIA. Negroponte has repeatedly said that he did not believe death squads were operating there.

Sen. Ron Wyden, D-Ore., said he saw a pattern of "ducking the facts."

"We are making a call now about your judgment. It looks to me that you saw things through an administration-colored lens," Wyden said.

Senators were aware of the challenges Negroponte faces. By showing up to work on the first day, Committee Chairman Pat Roberts, R-Kan., said, Negroponte will be stepping on toes. Roberts said some intelligence professionals need leadership — and "a kick in the pants" when they aren't sharing information with each other.

The intelligence community's shortfalls are the reason Negroponte's job was created.

Negroponte said the job will be the toughest of his long government career, Buss reports.

Since the attacks of Sept. 11, 2001, the intelligence community has come under fire for its performance leading up to the suicide hijackings and later, its prewar estimates of the threat posed by Iraq.

The Sept. 11 commission's best-selling report advocated creating a strong national intelligence director to bring the spy community together under one umbrella. About six months later, Congress went along.

Yet significant doubts remain about whether the job, as cast in law, comes with adequate authority to rein in the various agencies trained in eavesdropping, code-breaking and old-fashioned spying.

Just this month, President Bush's commission investigating intelligence shortfalls advised giving the new intelligence director powers to match his responsibilities, warning that the CIA and Defense Department agencies will try to "run around — or over" him.

Illustrating the breadth of issues that Negroponte faces, West Virginia Sen. Jay Rockefeller, the committee's top Democrat, asked how he'd deal with issues of foreign detainees abused in U.S. custody. Negroponte promised that agencies would be in "full compliance" with the law and added that torture is "illegal and reprehensible."

Almost three hours into the session, a protester briefly interrupted Negroponte to object to U.S. human-rights policy. The demonstrator was quickly removed by Capitol Hill police.

Mr. Bush has trusted Negroponte with difficult assignments in the past.

He was ambassador to the United Nations when U.S. relations with the world organization were on the decline during the approach to the Iraq invasion. Last summer, Mr. Bush sent him to Iraq as ambassador during the middle of the insurgency.

Negroponte has also held official posts in eight countries, including ambassadorships in Honduras, Mexico and the Philippines.