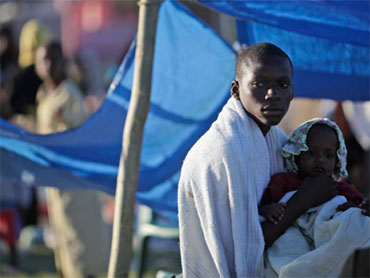 Here's a look at some of the international aid pledges for victims of the earthquake in Haiti:

•The U.S. government is making an initial $100 million relief effort and is sending ships, helicopters, transport planes and 2,000 Marines.

• The Netherlands and the Italian bishops' conference have each donated euro2 million. Denmark has donated 10 million kroner ($1.9 million) and Finland is giving euro1.25 million ($1.8 million). South Korea has pledged aid worth $1 million.

• India and China will each donate $1 million and China is sending a 60-member relief team with sniffer dogs.

• Sweden has offered 6 million kronor ($850,000), along with tents, water purification equipment and medical aid. It is also sending a team to build a new base to replace the U.N.'s destroyed headquarters.

• Iceland and Portugal are each sending more than 30 rescue workers. Taiwan has sent 23 rescue workers and two tons of aid and equipment.

• Israel plans to open a field hospital and is sending 220 rescue workers.

• A Swiss rescue team is arriving overland from the Dominican Republic. A flight carrying 40-50 tons of aid goods is planned for Friday.