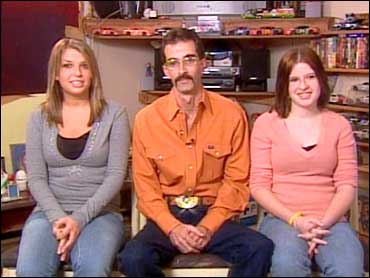 With so much talk about the dangers of online communities, it is rare to hear about the success stories. But for one broken family, the Internet brought a happy new beginning.

Sommer Owens, 19, has spent her teen years searching for her father and half-sister, and last week she tracked them down through the social networking site MySpace.com.

Sommer's parents divorced when she was just a baby and she grew up with her mother and brother in Minnesota. Her father kept in touch by phone until, after a series of moves, they lost track of each other when Sommer was about 8 years old.

But Sommer never gave up. She knew her father was living in Texas and that he had a daughter named Brittany from his new marriage.

So she turned to MySpace.com. The site's founders say it has more than 43 million members, each with their own page.

Sommer searched for her half-sister's name and took the plunge.

"I just typed in for Brittany's name. She was one of the only ones that showed up around Arlington that was her age,"

So Sommer fired off an e-mail. "I know this sounds really weird but I have a dad named David and I've got a sister down there and I was just wondering, 'Is your dad named David?' " she wrote.

Miles away in Texas, Brittany had the surprise of her life. "I was shocked," she said. "I had no idea what to think."

Brittany showed her father the message.

"As soon as she pulled up the picture, I knew it was Sommer," David Owens told Smith. "I went into my bedroom and kind of cried and Brittany and Sommer, they both talked to each other until about 2 in the morning on instant messages."

Brittany has always known she had a half-sister somewhere, and was thrilled to finally find her.

"It was pretty cool," she said. "I've never really had a big sister."

After a flurry of e-mails and phone calls, Sommer and her brother, Ben, flew from Minnesota to Texas, where they were reunited with their father and Brittany.

And while the teenagers might be able to play it cool, David Owens is still grappling with his strong emotions after finding his older children.

"It was amazing. I was an emotional wreck, myself," he told Smith. "I broke down like a little baby at the airport."