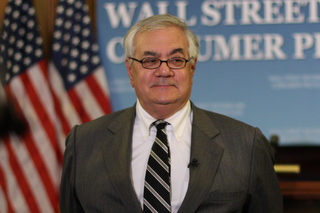 America's lingering Great Recession has already yielded a dramatic spike in unemployment rates and unprecedented government debt. Who would have expected it to usher in legalized Internet gambling as well?

In much the same way that some state officials have proposed taxing marijuana to raise money, advocates of legalizing online poker and slots are saying that billions of dollars in new tax revenue could be raised just by changing the law.

At least some politicos are taking those arguments seriously. The U.S. House of Representatives committee charged with writing tax laws will hold a hearing on Wednesday morning to consider a trio of legalization-and-taxation proposals.

Rep. Barney Frank (D-Mass.) is the author of H.R. 2267, which would allow Internet casinos to obtain licenses from and be regulated by the federal government. A related bill, H.R. 2268, would impose a 2 percent federal "Internet gambling fee" and, just in case, require that the IRS be notified of taxpayers' winnings. The third, H.R. 4976, says state governments may collect a 6 percent gambling tax.

The proposals would raise an extra $58 billion in tax revenue by 2015 and create about 32,000 jobs, estimates a report released last month by H2 Gambling Capital, a gaming consultancy. (H2 was assuming that all forms of Internet gambling, including sports betting, would be permitted.)

You can read the rest of this piece on CNET News.com.