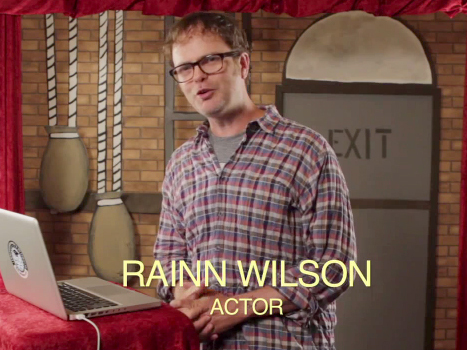 (CBS News) The character of Dwight Schrute has not only become a much-loved staple of television, but also a series of popular memes entitled "Schrute Facts" based on his series of "False!" retorts to just about anything. Which is why it's so great to see actor Rainn Wilson bring the character and meme to life in the real world by reading some random tweets in the video above and giving his trademark analysis and thoughts about their validity.  Check it out.

The extremely witty sketch was posted by College Humor as a part of their ongoing Malarious series that brings comedy and celebrities together to fight the not-funny-at-all and very real problem of malaria worldwide.  They write about the Malarious project:

30 celebrities. 24 videos. One cause. Millions of stupid, awful, disgusting mosquitoes. Pay a dollar, five dollars, or whatever you want, and watch these comedy stars do awesome things to help squash this awful disease.

We here at The Feed would like to give a big triple-rainbow salute to College Humor, Malaria No More and all of the celebrities involved in this worthwhile endeavor, and major props go out to Rainn Wilson for this very hilarious meme-made-real sketch.  If you'd like to get some more laughs and help a great cause, be sure to go to College Humor's Malarious website by clicking here.