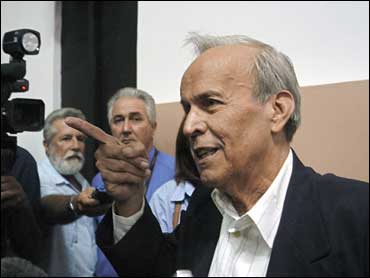 Almost nine years after their arrest on charges of spying on the U.S., five Cubans are awaiting an appeals court ruling. Portia Siegelbaum spoke with Cuban parliament president Ricardo Alarcon about the case.

Cuban parliament president Ricardo Alarcon says the handling to date of the case of the five men known on the island as the "Five Heroes" means one thing: "That the U.S. is not yet in the position to fight anti-Cuban terrorism and that's a real threat to our life and the safety of the Cuban people."

He insists that the Five's only crime was to infiltrate anti-Castro exile groups to try to stop violence against the island and that the prosecutors failed to prove anything else.

Yet, he says, while the five men are serving long prison terms in the United States, "terrorists" such as Cuban exile Luis Posada Carriles, indicted for blowing up a civilian airliner in mid-flight, walk free in Miami. The cases, he says, are "absolutely inseparable" and that among other groups the Five had been monitoring was one linked to Posada.

"Cuba has had for almost half a century a need to protect ourselves. We didn't attack anybody, we didn't use violence, we didn't use war, we just used what is referred to now in America as human intelligence. Well these five are real heroes because they sacrificed their lives, they run many risks, imagine to be inside those criminal groups without being a criminal, you are risking everyday to be discovered by them and getting killed. It wouldn't be the first case in Miami.

"Perhaps the most flagrant example of misconduct was that the trial of the Five had to take place in Miami. In your country practically everyday some defendant gets change of venue in order to preserve his right to a fair and balanced hearing. The government insisted on having that trial in Miami," stressed Alarcon.

He notes that the discussion on venue coincided with the Elian Gonzalez custody saga, which only concluded when the federal government sent special troops in to rescue the boy because the Miami police and the Miami mayor had refused the U.S. attorney general's order to turn the boy over to his father for return to Cuba. All the proceedings, according to him, were poisoned by that atmosphere.

Worse yet, according to Alarcon, is the excessive sentencing of the five men including a guilty ruling on a charge that the prosecution confessed it could not prove. That charge, against Gerardo Hernandez, was of alleged conspiracy to commit murder in the first degree in the downing of the Brothers to the Rescue plane.

"In May 2001, when the court was going to recess, when they were approaching the end of the process…the U.S. [prosecutor] tried to change that charge saying that they couldn't prove that charge and they wanted to modify it…. The judge said, 'its too late, we have spent 7 months discussing that, now it's up to the jury to decide if they agree with you or not.' Then they [the government prosecutor] appealed to the 11th Circuit in Atlanta [where the defense is currently appealing]…The attorney general acknowledged he could not prove his accusation and asked for it to be modified," says Alarcon.

The jury, says Alarcon, knew of the U.S. government prosecutor's efforts to drop the charge of conspiracy to commit murder for lack of proof. It nevertheless found Hernandez guilty of it and sentenced him to an additional life term.

"Only in Miami can such a thing happen. Only under the atmosphere of fear and pressure," says Alarcon, who has been the Cuban government official heading up the efforts to get the sentences reversed.

The defense's current appeal is not the first time the Atlanta court is hearing about the case and Alarcon finds that encouraging. "We should be really very optimistic."

The recent sentencing in two similar cases also give him hope.

"The United States of America vs. Khalid Abdel-Latif Dumeisi, an Arab, an Iraqi. This man was found guilty of being an agent from the Saddam Hussein Regime and not being registered as such at the Department of Justice. Being an unregistered agent is the only violation the Five really committed. But this guy was arrested in Chicago when the U.S. was at war with the Saddam Hussein regime. Sentence of Mr. Dumeisi, 46 months in jail-- 3 years and 10 months. And the prosecutor in this case and the court determined that this man was not spying on the U.S. because he was only spying on the anti-Saddam groups of exiles in Chicago…The Five have been sentenced to four life terms plus 75 years and their only clear crime was the same as Mr. Dumeisi.

"This other example is from last month. The Federal Court in New Jersey, the United States of America vs Leonardo Aragoncillo. A Philippine person, an official of the FBI. This guy was an official, an analyst I think, of the FBI. He was found guilty of espionage. Real espionage, substantive espionage, according to his indictment. The FBI found that he had transmitted to a foreign government 736 secret documents, from the White House, State Department and the Pentagon. Found guilty with material proof of espionage, sentence 10 years of incarceration.

"The Five are entering their tenth year of incarceration for having committed the same crime as the Saddam Hussein agent and without having been accused of stealing a single piece of paper, a single piece of information," Alarcon points out.

"Atlanta has the possibility to dismiss everything … [the Five's] only crime was to try prevent death and violence, to prevent terrorist acts at a time when the U.S. is involved in a so-called war on terrorism," concluded Alarcon.