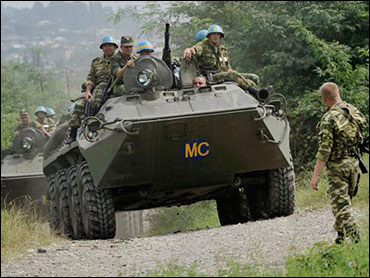 This column was written by Julia Ioffe.

There's a saying oft heard in Russian schoolyards: "Go ahead and spit at me. Fill your mouth with shit and spit at me." It may be an indelicate way of suggesting that one should cut off one's nose to spite one's face, but it provides some insight into why Russia's economy, which grew by eight percent last year, has suddenly melted. The failures on Wall Street linked arms with falling oil prices to wallop a Russian market that, due to a combination of internal factors, had been sliding all summer. On Tuesday afternoon, trading on Russia's two exchanges, the RTS and MICEX, was shut down after they plummeted 12 and 18 percent, respectively. Wednesday morning, weary Russian brokers gingerly tried their luck again, but after six and three percent downturns, the exchanges will remain shuttered till Friday.

A double digit loss is a devastating shock for any market, but Russia's stock market has lost over half its value since the start of the year. In the first part of the year, investors were already jittery about the Kremlin's meddling in the business world. And then things got really bad in August. Remember August? That was when Russia could not resist using Georgia's attack on South Ossetia to retaliate with such force that the West could only marvel at Russia's lack of discretion. When Putin responded to Western criticism, he was so defiant that Leonid Radzihovski, a columnist for the liberal online political journal Ezhednevny Zhurnal, characterized his government's diplomatic position as: "If America wants it so much, let it come and make up with us."

Putin gambled that it was worth taking the economic hit at home to reestablish Russia's geopolitical stature. With oil prices in the triple digits, he surely figured, the blow would be well-cushioned; foreign investors would eventually calm down and realize they couldn't live without Russia. And he had reason to believe it. Even though much of the growth was fueled by petrodollars, the Russian economy was slowly diversifying and strengthening. Russian wages and consumer spending were growing at over ten percent a year, construction and manufacturing boomed--everything was expanding so fast that even with an added risk premium (around three percent), foreign corporations' Russian outposts were extremely profitable. "They can't afford not to be here," a Russian analyst told me two weeks ago.

The problem, however, is that Western investors got scared off by the extremity of the Kremlin's response to Georgia, the harshness of American criticism, and the way domestic companies were being strong-armed even more than they had been for the last six years (metallurgical company Mechel lost a third of its value in one day this July when Putin trained his critical gaze on it). Investors decided that they could very much afford not to be there. "Doing business in Russia has never been for the faint of heart," Alexander Kliment, an analyst with the Eurasia Group, told me this week. "But now investors are really starting to see the unpredictability of the Kremlin's decision making."

And here's where things get really Russian: Though the Kremlin acted as if it wanted the West to shove off, what they really meant was, love us. We may despise you, but you still gotta love us. It's a common Russian attitude towards the West, one of both contempt and envy that the analyst described as "the double-faced Janus." As Radzihovski sarcastically put it, "We're quite sure that the more we shit on their countries, governments, and the West in general, the greater will be their masochistic pleasure in crawling back on their bellies with their money. Having read Dostoyevsky, Western bankers will behave accordingly in the land of Dostoyevsky!"

Apparently, Western bankers didn't get the joke, because in August alone, over $20 billion of foreign investment made for the hills, $7 billion of it in the first two days of the war alone. Scared to do business with such a reckless, unpredictable partner, investors had been closing ranks all summer, and Georgia only locked up their formation. The risk premium has spiked to nine percent, foreign banks stopped lending money to Russian companies--suddenly in dire need of it because all that foreign capital had fled--and foreign issuance dropped by over 85 percent since June. And then oil prices tanked, American brokerages folded (taking their foreign investments with them), and Russian companies, already cash-strapped, started looking around for money, putting in margin calls, borrowing at home, and forcing the Russian Central Bank to free up some $45 billion to pump into the market to keep it liquid. If the government doesn't clean up its mess quickly and efficiently, it might be risking its own life. "The system is based on economic growth and rising living standards," Kliment said. "If they drop, the wheels come off politically."

Russia would have been hit by this crisis no matter what, but, had it not hobbled itself all summer, it would have met the downturn with a greater reserve of strength. Now, although the whole world is hurting, no other stock market is doing as badly as Russia's. Take Brazil, another resource-rich emerging economy riddled with corruption. Its stock market is also in crisis--after an eight percent drop yesterday. But Brazil isn't telling its neighbors to go do unprintable things; it's strengthening trade deals with them and diversifying its energy sector. It isn't going out of its way to beat its chest and attempt to instill fear it mistakes for respect. And, as a result, it didn't take as big of a hit this week. But then again, Brazilian children probably don't go around advocating shit-spit revenge either.
By Julia Ioffe
Reprinted with permission from The New Republic