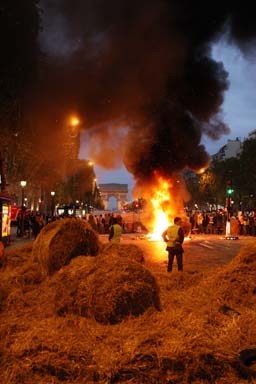 NASA on Sunday named a retired Navy admiral who helped investigate the USS Cole terrorist bombing to lead an independent investigation of the space shuttle Columbia accident. All theories about what happened are being explored, officials said.

Harold W. Gehmen Jr. will lead a special government commission that will sift through the Columbia wreckage being gathered from across Texas and Louisiana and trucked under tight security to an Air Force base for analysis.

"We're securing all the debris and assuring that we look at every possible angle of what could have caused this horrible accident," NASA chief Sean O'Keefe said.

"We are making sure that we don't take any pet theory or any one approach and favoring over one or another," O'Keefe said during a broadcast interview.

Officials said that the debris being collected from far flung areas of Texas and Louisiana are being trucked to Barksdale Air Force Base in Louisiana for inspection and analysis.

A team of 20 engineering experts from the United Space Alliance, a key contractor for NASA's shuttle program, is being sent to the base to examine the debris. Another 50-man team is on standby, officials said.

Though FBI agents are assisting in the recovery of human remains and fuselage, senior law enforcement officials reiterated Sunday there was no evidence of foul play and that the investigative focus was on a mechanical or structural problems.

O'Keefe said Gehman is "well versed in understanding exactly how to look about the forensics in these cases and coming up with the causal effects of what could occur," O'Keefe said during a broadcast interview.

O'Keefe described the commission as "an independent objective board" and said Gehman would be arriving in Shreveport, La., with a team on Sunday afternoon.

"We're going to find out what led to this, retrace all the events ... and leave absolutely no stone unturned in that process," O'Keefe said.

On Saturday, O'Keefe said the independent panel would include experts from the Air Force and Navy — which had five of the seven Columbia crew members — while officials from the Transportation Department and other federal agencies would study the accident.

In addition to the Gehman commission, NASA will conduct its own investigation, as will the House Science Committee, whose chairman is Rep. Sherwood Boehlert, R-N.Y. His committee oversees NASA.

"The NASA investigation will focus more on the technical aspects," Boehlert told ABC. "We have to be concerned about the policy aspects and what is the future of human space flight."

Hearings are expected in the Senate Commerce, Science and Transportation Committee, said Sen. Sam Brownback, chairman of the subcommittee on science, technology and space.

Gehman was commander in chief of U.S. Joint Forces Command until his retirement in the summer of 2000. Crouch is a former commander of U.S. Army Europe and chief of NATO's Allied Land Forces Central Europe. In that capacity he was commander of the U.S.-led NATO peacekeeping force in Bosnia in 1996-97.

The Cole was refueling in Aden harbor in Yemen on Oct. 12, 2000, when a small boat sidled up to the 505-foot destroyer and detonated a load of explosives. The blast ripped a hole 40 feet high and 40 feet wide in the hull of the $1 billion warship and killed 17 sailors.

It was the first time terrorists had successfully attacked a U.S. Navy ship, and the Cole commission said in its report in January 2001 that the bombers had found a "seam in the fabric" of the Navy's system of self-protection.

The Columbia investigations will review all the information NASA collected as the spaceship began its descent, then started breaking up more than 200,000 feet over Texas.

That includes transmissions from the crew, as well as records from the shuttle's sensors, analysis of the debris and data from military, government and commercial satellites.

Military satellites with infrared detectors picked up several flashes as Columbia broke apart, according to a defense official who spoke only on condition of anonymity. It was unclear whether those "spikes" of heat indicated an explosion, the burning of pieces of debris re-entering the atmosphere or something else.

That commission reported four months later that an O-ring seal leaked in the right booster rocket. That allowed hot gases to burn through the bracket securing the booster to the shuttle, rupturing the shuttle tank.

The shuttle fleet was grounded for nearly three years while changes were instituted and repairs made.