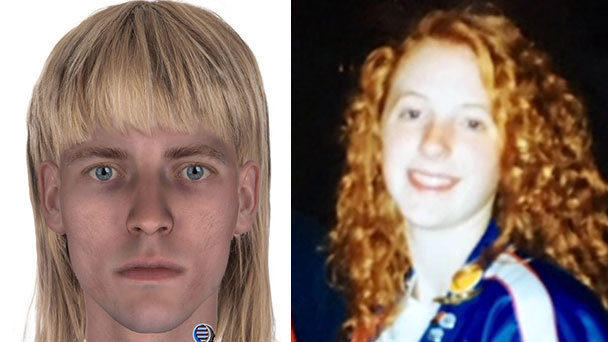 TACOMA, Wash. -- Authorities in Washington hope images created from DNA evidence will help solve a murder that has stumped them for more than a quarter-century.

Sarah Yarborough left home Dec. 14, 1991, to attend a dance competition at Federal Way High School in Federal Way. The body of the 16-year-old girl was later found near the school's tennis courts.

The original description of the suspect based on witness accounts was a 6-foot man with shoulder-length blonde hair.

The King County Sheriff's Office on Friday released images that predict what the suspect looked like then and looks like now based on male DNA found at the scene.

The News Tribune reports the images were created by Parabon NanoLabs, a Virginia-based technology company that specializes in a process that uses DNA evidence to predict physical appearance.

Captain Ted Boe told CBS affiliate KIRO that looking at the original police sketches and the new predictive image, "you can tell it's the same person. The witnesses saw the right guy."

Retired Detective Jim Allen, who continues to work on the case though he has left the sheriff's office, told the station he hopes the new image jogs someone's memory.

"We're hoping to get that one phone call. It's going to take one good tip," Allen said.