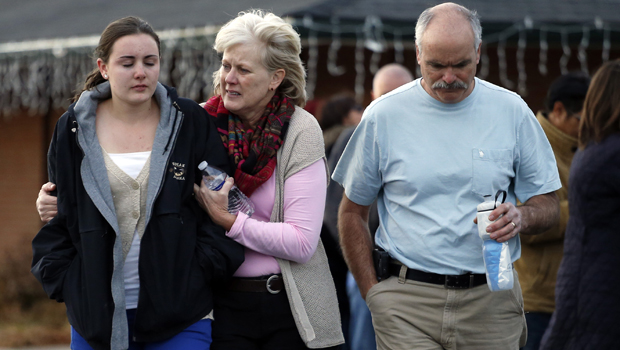 CENTENNIAL, Colo. -- A Colorado high school student with an apparent grudge against a teacher wounded a classmate with a shotgun before killing himself, chilling a state that's still trying to make sense of mass shootings at Columbine High School and an Aurora movie theater.

CBS News correspondent Barry Petersen reports from Centennial that authorities are promising they will go carefully and slowly in their hunt for answers.

Quick-thinking students at Arapahoe High School on Friday alerted the targeted teacher, who quickly left the building. Police immediately locked down the scene on the eve of the Newtown massacre anniversary - a somber reminder of how commonplace school violence has become.

Students like Peter Strouse, who heard the gunshots, took cover as the school went into lockdown. Strouse told Petersen that his classmates took out their cell phones and texted their parents to let them know what was happening.

"None of them called them because they wanted to be quiet," Strouse said.

Within minutes, the 18-year-old shooter was dead, apparently of a self-inflicted gunshot wound.

Arapahoe County Sheriff Grayson Robinson identified the gunman as Karl Halverson Pierson, a senior who participated in debate activities. Robinson said Pierson had had an altercation with the teacher, but the sheriff did not provide details or elaborate on a motive.

The wounded classmate, a 15-year-old girl, was in critical condition with a gunshot wound, Robinson said. Two other students were treated for minor injuries and released.

Authorities evacuated hundreds of students in an orderly procession - a demonstration of aggressive security measures developed by police and schools following the chaotic 1999 shooting at Columbine, some 8 miles west of Arapahoe High.

After that tragedy, police across the country developed "active shooter" training in which responding officers rush toward gunfire - and step over bodies and bleeding victims if necessary - to stop the gunman.

"The first deputy sheriffs and police officers that were on scene immediately entered the school to engage the shooter if they could locate that individual and keep the other students safe," Robinson said.

"This kid, the officers went right to him literally within minutes," said Gov. John Hickenlooper. "That is a world of change from the way response used to happen."

Before Columbine, officials followed a contain-and-wait strategy in which arriving officers set up a perimeter to contain the situation, then wait for SWAT team members trained in military tactics to bring down the gunman.

Robinson said Pierson made no attempt to hide his weapon while entering the school from a parking lot and asking for the teacher by name.

When the teacher learned that he was being targeted, he left "in an effort to try to encourage the shooter to also leave the school," Robinson said. "That was a very wise tactical decision."

Students heard shots and cowered in classrooms while awaiting word on what had happened.

Senior Megan Jeffords, 18, was singing Christmas carols in the hall with her choir class when the shots rang out. A teacher rushed the 18 singers into a closet, where they huddled for more than half an hour.

Hours later, after Jeffords was reunited with her father, she was still visibly shaken and unable to talk much about what happened.

Jessica Girard was in math class when she said she heard three shots.

"Then there was a bunch of yelling, and then I think one of the people who had been shot was yelling in the hallway, 'Make it stop,'" she said.

Two suspected Molotov cocktails were also found inside the school, the sheriff said. One detonated, though no one was injured.

The shooting came a day before the anniversary of the Newtown, Conn., attack in which a gunman killed 20 children and six adults at Sandy Hook Elementary School.

Since Columbine, Colorado has endured other mass shootings, including the killing of 12 people in a movie theater in nearby Aurora in 2012. But it was not until after the Newtown massacre that state lawmakers moved to enact stricter gun control laws.

Two Democratic lawmakers were recalled from office earlier this year for backing the laws, and a third recently resigned to avoid a recall election.