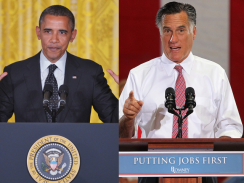 (MoneyWatch) Stocks are up, and so is President Barack Obama's lead in the polls. That's probably no coincidence. Some measures posit a strikingly close correlation between the U.S. stock market and Obama's chances of re-election.

In the chart below, the red line is from Irish "prediction market" firm Intrade, which lets investors bet on different political outcomes, including the November presidential election. It charts trading in futures contracts related to the likelihood of Obama winning re-election -- dubbed an "Obama share." We've added the blue line, which tracks the stock market as measured by the Wilshire 5000 Total Return index.

As stocks go, in other words, so does the value of an Obama share. Coincidence? Probably not, given that polls show that the economy is easily the No. 1 concern among voters and that the stock market is a forward-looking indicator of the economy.

Obama and stocksStocks -- Bush vs. ObamaA sure bet on the election

Since July 16, the Wilshire 5000 is up 8.1 percent. According to my model, that means Obama's chances of re-election are up 9.2 percentage points since that time, increasing his odds of keeping the White House from 55.9 percent to 65.1 percent. On Sept. 21, Obama futures closed at $7.03 a share, meaning that investors gave the President a 70.3 percent chance of having another four years.

Praying for a plunge?

According to Brian Montopoli, senior political reporter at CBSNews.com, "Voters overwhelmingly cite the economy as their top issue, and a robust stock market, which suggests economic optimism, is thus a very good sign for the president."

Though we are all fixated on the rough and tumble of the election, the hardball advertisements and the upcoming presidential debates may end up having little impact on the polls. Meanwhile, the direction of stocks are beyond the control of Obama or Romney.

According to this analysis, it would take a 17.3 percent decline in U.S. stocks for Romney to win. That's just shy of bear market territory, usually defined as a 20 percent decline.