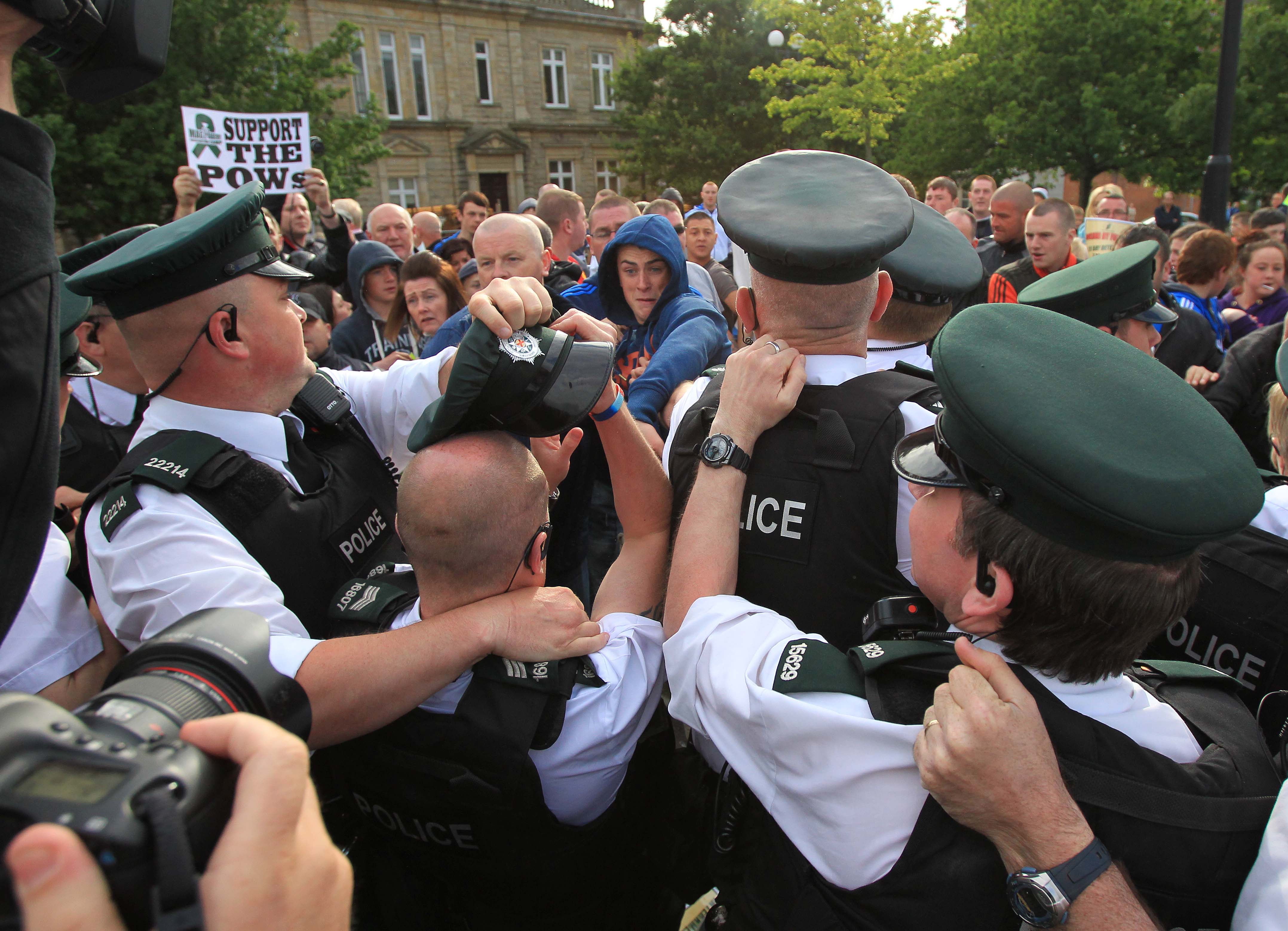 (AP) LONDONDERRY, Northern Ireland - Irish Republican Army supporters clashed with police Monday and forced Olympic torch organizers to divert the route of their relay, marring what had been a jubilant day's procession through a sun-soaked Northern Ireland.

Police said at least one protester was arrested after a 200-strong group broke through police lines as the torch passed the city hall building in Londonderry, Northern Ireland's second-largest city and a support base for IRA factions still plotting to wreck the peace process. No serious injuries were reported.

The protesters made clear they were seeking to confront police, not the Olympic torch itself. Many carried placards denouncing the police, who have mounted raids in hardline Irish republican parts of the city ahead of the torch's visit.

Hours before the torch arrived, British Army experts dealt with a suspected bomb left near a Catholic high school but declared it a hoax device. Police also arrested a suspected IRA member in an unrelated raid. On Saturday, a police unit was attacked with a homemade grenade, badly damaging its sports utility vehicle but injuring no officers.

While most IRA members renounced violence and disarmed in 2005, several small splinter groups continue to mount attacks, particularly against police.

Officers surrounding the torchbearer, 58-year-old Isobel Coote, quickly changed course and escorted her down a side street where she resumed her journey to the city's new pedestrian Peace Bridge. It spans the River Foyle, which divides Londonderry into a predominantly British Protestant east side and an Irish Catholic west.

The brief clash near Londonderry's Guildhall was at total odds with the rest of the day's celebratory, even giddy air as the symbol of the London Games enjoyed a leisurely stroll along stunning coastal scenery and a string of tourist hotspots basking in rare sunshine.

The Olympic cavalcade began Monday on the Carrick-a-Rede rope bridge, a vertigo-inducing attraction that connects mainland cliffs to a tiny island. One torchbearer crossed the footbridge, with its views underfoot of crashing waves 30 meters (yards) down, and used her flame to light another runner's torch.

Next, another torchbearer walked carefully along the Giant's Causeway, an up-and-down natural stairway composed of tens of thousands of six-sided basalt rocks that run right into the Atlantic. The carrier, 54-year-old Ironman athlete Peter Jack, said he had to concentrate not to slip or stumble on the wet, flat-topped columns of basalt. About 1,000 spectators and visitors cheered as he reached the highest rock nearest the waterline and raised the flame.

The torch next visited the ruins of Dunluce Castle, a cliffside residence that was abandoned after its kitchen and staff fell one night into the Atlantic. Then the flame was loaded onto an eight-man rowing boat and ferried across the Bann, the major river of Northern Ireland that cuts the province into a predominantly Protestant east and mostly Catholic west.

On the road into Londonderry, torchbearers passed through the villages of Ballykelly and Greysteel, names synonymous with two of the worst mass killings of Northern Ireland's conflict.

In December 1982 in Ballykelly, an IRA splinter group called the Irish National Liberation Army killed 17 people and wounded 30 with a time bomb left in a crowded disco frequented by British soldiers from a nearby base.

The small bomb, placed beside a pillar, made the roof collapse. Eleven of the dead were soldiers, the other six local Protestant women and teenagers. It was the second-worst death toll from a Northern Ireland bombing, overtaken only by the Omagh bombing of 1998, when a car bomb by the Real IRA faction killed 29 civilians.

Greysteel, a mostly Catholic village on the road to Londonderry, entered world headlines in October 1993, when anti-Catholic militants from the outlawed Ulster Defense Association burst into a pub full of party-goers celebrating Halloween, shouted "Trick or treat!" and tried to shoot everyone inside. Eight civilians died and 13 were wounded in the Rising Sun Bar. A plaque outside the pub honoring the eight dead reads: "May their sacrifice be our path to peace."

The torch travels Tuesday through more than a dozen Northern Ireland towns and villages, including Omagh. On Wednesday, it crosses the border for a circuit of Dublin, the capital of the Republic of Ireland, before returning north for a tour of Belfast and party outside Belfast City Hall.