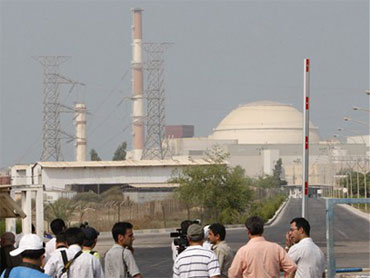 Iranian and Russian engineers began loading fuel into Iran's first nuclear power plant on Saturday, a major milestone as Tehran forges ahead with its atomic program despite U.N. sanctions.

The weeklong operation to load uranium fuel into the reactor at the Bushehr power plant in southern Iran is the first step in starting up a facility the U.S. once hoped to prevent because of fears over Tehran's nuclear ambitions.

Iran's nuclear chief celebrated the plant as "a symbol of Iranian resistance and patience" and said it demonstrated the country's nuclear aims are entirely peaceful - an assertion that many governments around the world seriously question.

"Despite all pressure, sanctions and hardships imposed by Western nations, we are now witnessing the startup of the largest symbol of Iran's peaceful nuclear activities," Ali Akbar Salehi told reporters inside the plant.

Russia, which helped finish building the plant, has pledged to safeguard the site and prevent spent nuclear fuel from being shifted to a possible weapons program. After years of delaying its completion, Moscow says it believes the Bushehr project is essential for persuading Iran to cooperate with international efforts to ensure Iran does not develop the bomb.

The United States, while no longer formally objecting to the plant, disagrees and says Iran should not be rewarded while it continues to defy U.N. demands to halt enrichment of uranium, a process used to produce fuel for power plants but which can also be used in weapons production.

"Bushehr underscores that Iran does not need an indigenous enrichment capability if its intentions are purely peaceful," a White House official said. "Russia's supply of fuel to Iran is the model we and our P5+1 partners (China, France, Germany, Russia and the United Kingdom) have offered to Iran. Iran is expected to meet established international norms and practices to ensure the safe operation of the reactor under full safeguards monitoring by the International Atomic Energy Agency. Our views on the Bushehr project should not be confused with the world's fundamental concerns with Iran's overall nuclear intentions, particularly its pursuit of uranium enrichment, and Iran's willful violation of its international obligations."

On Saturday, a first truckload of fuel was taken from a storage site to a fuel "pool" inside the reactor building under the watch of monitors from the U.N.'s International Atomic Energy Agency. Over the next two weeks, 163 fuel assemblies - equal to 80 tons of uranium fuel - will be moved inside the building and then into the reactor core.

Workers in white lab coats and helmets led reporters on a tour of the cavernous facility.

It will be another two months before the 1,000-megawatt light-water reactor is pumping electricity to Iranian cities.

Iran denies an intention to develop nuclear weapons, saying it only wants to generate power with a network of nuclear plants it plans to build.

The Bushehr plant is not considered a proliferation risk because the terms of the deal commit the Iranians to allowing the Russians to retrieve all used reactor fuel for reprocessing. Spent fuel contains plutonium, which can be used to make atomic weapons. Additionally, Iran has said that IAEA experts will be able to verify that none of the fresh fuel or waste is diverted.

Of greater concern to the West, however, are Iran's stated plans to build 10 new uranium enrichment sites inside protected mountain strongholds. Iran said recently it will begin construction on the first one in March in defiance of the U.N. sanctions.

Nationwide celebrations were planned for Saturday's fuel loading at Bushehr.

"I thank the Russian government and nation, which cooperated with the great Iranian nation and registered their name in Islamic Iran's golden history," Salehi said. "Today is a historic day and will be remembered in history."

He spoke at a news conference inside the plant with the head of Russia's state-run nuclear corporation, Sergei Kiriyenko, who said Russia was always committed to the project.

"The countdown to the Bushehr nuclear power plant has started," Kiriyenko said. "Congratulations."

Iran's hard-liners consider the completion of the plant to be a show of defiance against U.N. Security Council sanctions that seek to slow Iran's nuclear advances.

Hard-line leader Hamid Reza Taraqi said the launch will boost Iran's international standing and "will show the failure of all sanctions" against Iran.

Russia signed a $1 billion contract to build the Bushehr plant in 1995 but has dragged its feet on completing the work.

Moscow had cited technical reasons for the delays, but analysts say Russia used the project to try to press Iran to ease its defiance over its nuclear program.

The uranium fuel used at Bushehr is well below the more than 90 percent enrichment needed for a nuclear warhead. Iran is already producing its own uranium enriched to the Bushehr level - about 3.5 percent. It also has started a pilot program of enriching uranium to 20 percent, which officials say is needed for a medical research reactor.

The Bushehr plant overlooks the Persian Gulf and is visible from several miles (kilometers) away with its cream-colored dome dominating the green landscape. Soldiers maintain a 24-hour watch on roads leading up to the plant, manning anti-aircraft guns and supported by numerous radar stations.

There are several housing facilities for employees inside the complex plus a separate large compound housing the families of Russian experts and technicians. The site is about 745 miles (1,200 kilometers) south of Tehran.

Iran says it plans to build other reactors and says designs for a second rector in southwestern Iran are taking shape.

The Bushehr project dates backs to 1974, when Iran's U.S.-backed Shah Mohammed Reza Pahlavi contracted with the German company Siemens to build the reactor. The company withdrew from the project after the 1979 Islamic Revolution toppled the shah.

The partially finished plant later sustained damages after it was bombed by Iraq during its 1980-88 war against Iran.

Before making the Russian deal to complete Bushehr, Iran signed pacts with Argentina, Spain and other countries only to see them canceled under U.S. pressure.