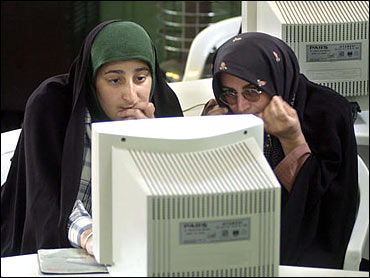 Over 140 web sites promoting dissent against the cleric-run establishment, dancing and sex have been blocked since the crackdown was launched last month, said Farhad Sepahram, a Telecommunications Ministry official.

Most blocked sites belong to Iranian opposition groups, including one run by Reza Pahlavi, son of the late Shah Mohammad Reza Pahlavi, who was toppled during the 1979 Islamic Revolution, and Abolhassan Banisadr, Iran's first-elected president after 1979, who now opposes the establishment.

Also blocked are the Voice of America's Farsi program and radiofarda.com, another U.S.-financed, Farsi-speaking radio program.

Sepahram said his ministry had blocked some pornographic sites run by Iranians from outside the country, but admitted it was impossible to close all sex-related sites.

The United States cut off relations with Iran in 1979 after militant students stormed its embassy in Tehran. The U.S. has also imposed trade sanctions on Iran.

Sepahram said his ministry was following orders from the Supreme Cultural Revolution Council, an unelected body controlled by hard-liners. "We have no preferred choice. We block sites according to a list we get from the council."

The council was established by the late Ayatollah Ruhollah Khomeini, leader of the 1979 revolution. Most members are appointed by Ayatollah Ali Khamenei, Khomeini's successor. Reformist President Mohammad Khatami is the chairman but conservatives outnumber reformists on the council.

Khatami was elected on promises of delivering wide social and political reforms in conservative Iran, but continued opposition from Khamenei's unelected establishment has curbed his efforts and frustrated Iranians craving greater freedoms.

"Although some of the sites I used to visit have been blocked, there are many other ways I can reach them," according to regular Iranian Internet surfer Hadi Amouzegar.

Prominent political analyst and journalist, Saeed Leylaz, said the Internet crackdown was intended to curb the impact sites run by opposition parties and pro-reform advocates on the Iranian public.

"That they are blocking sites with pornographic materials is a malicious lie," Leylaz said.

"The intention is to block web sites run by both opposition groups and reformers who talk to their audience through the web after their newspapers were closed down by the hard-line judiciary."

Leylaz said the crackdown was an attempt to deny reformers a forum to address Iran's young and Internet-savvy population.

"In the 1980s, the government banned videos. In recent years, it went onto impose restrictions on satellite dishes, but none worked," said Mazrouei, whose father is a leading reformist legislator, Rajabali Mazrouei.

"Blocking web sites is more difficult to do. They can't deny a nation impatient for change from information they like to know."

Hard-liners are increasingly concerned about Iranians' access to information from the outside world, a sign of worry that communications are playing a role in stirring pro-reform sentiment.