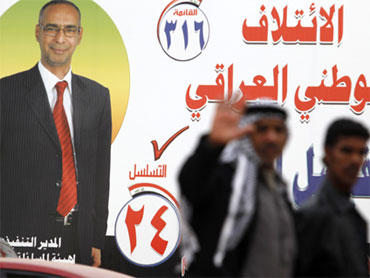 As the U.S. prepares to withdraw its forces from Iraq, Iran is said to be working hard to fill a potential power vacuum — an effort that faces its first big test in Sunday's elections, in which Tehran is backing hard-liners against a coalition of moderates.

Shiite Iran already has reliable allies in Syria, Lebanon's Hezbollah and Gaza's Hamas, and a free rein in Iraq would broaden its regional leverage, unnerving Israel and potentially diminishing the clout of Sunni powerhouses like Saudi Arabia and Egypt.

But it is Iran's alleged political meddling — what U.S. Ambassador Christopher Hill called its "malevolent involvement" — that most troubles U.S and Iraqi officials.

According to a senior Iraqi government security official with access to intelligence reports, it was Iranian influence that brought about the election alliance between two avowed Shiite rivals — the Sadrists who follow Muqtada al-Sadr, a Shiite cleric believed to be living in Iran, and the Iranian-backed Supreme Islamic Iraqi Council.

There are no reliable opinion polls, but the Shiite coalition, which is led by clerics and calls itself the Iraqi National Alliance, is expected to do well against Prime Minister Nouri al-Maliki, a moderate Iraqi whose bloc is dominated by Shiites but also has Sunnis and Kurds.

Whichever bloc wins the most seats in the 325-member parliament gets to nominate the next prime minister.

Another measure of Iran's growing influence is that the Sadrists have stopped publicly espousing an all-Arab agenda and vilifying links with outside forces including non-Arab Iran.

The Sadrists who emerged in 2003 used to be sworn enemies of the Supreme Islamic Iraqi Council, with supporters fighting each other on the streets until as recently as 2008.

The Iranians also pressured al-Maliki to join the alliance, but he refused, the security official said, speaking on condition of anonymity because he wasn't authorized to disclose the findings.

Al-Maliki's government has portrayed the Americans and Iranians as fighting a proxy war on Iraqi territory. If Iran gets its way in the election, and the Americans stick to the timetable of full withdrawal by the end of next year, it will have achieved a critical goal: an Iraq free of U.S. forces and influence, and willing to find an accommodation with a big neighbor that will never go away.

It would represent a full turnaround from the 1980s, when smaller but better-armed Iraq fought Iran to a standstill in an eight-year war that left 1 million people from both sides killed or wounded.

"The Islamic Republic will attempt to maintain its influence through a variety of means, including political patronage, economic cooperation and investment, religious ties, and armed support for Shiite insurgent groups," said Alireza Nader of the RAND Corp. a Washington-based research center.

The final goal, he said, was for Iraq to be ruled by Shiite parties following policies that mesh with Iran's own interests.

Iraq's Sunni Arabs say Iran was behind the banning of nearly 500 candidates, most of them thought to be Sunni, from running in the election because of their suspected ties to Saddam Hussein's outlawed Baath Party.

Tehran denies the allegations that it is fomenting violence or meddling in Iraq.

But the top American commander in Iraq, Gen. Raymond Odierno, has cited "direct intelligence" showing that two senior Shiite politicians in charge of the panel that barred the candidates — Ahmad Chalabi and Ali al-Lami — have ties to Tehran.

Shiite militiamen financed and trained by agencies loyal to Tehran's clerical regime have killed hundreds of U.S. soldiers in Iraq, often with roadside bombs supplied by Iran or constant rocketing of U.S. bases.

"Iran has a clear influence on the whole of Iraq," senior Sunni politician Osama al-Nujaifi said last week in a TV interview. "It interferes in the affairs of parliament, the government and the armed forces."

Iran isn't the only neighbor with a stake in the election. Saudi Arabia, Syria and Turkey are among those thought to be quietly backing their favored factions.

"Nothing having been solved in Iraq, fundamentally, it is only natural that regional players would move in," said Peter Harling of the Brussels-based International Crisis Group.

Iran and Iraq are both majority-Shiite, and Iraq has holy places visited by millions of Iranian Shiites every year. Iran builds cultural centers in Iraq, delivers free books, brings Iraqi politicians on expenses-paid visits to Iran, and hands out blankets to the urban poor.

But it has to move cautiously on Iraq's political terrain, mindful that too big a footprint could trigger an Iraqi nationalist backlash.

While most Iraqi Sunnis see Iran as evil, Shiite attitudes are more nuanced. Al-Maliki, for instance, believes Iraq has no choice but to nurture good ties with Iran. Ayad Allawi, his Shiite predecessor, views Iran as a potential threat to be kept at arm's length.

Allawi, a secular, Westernized Iraqi, is running for parliament at the head of a nonsectarian coalition which is not expected to win an outright majority but could emerge as a power broker.