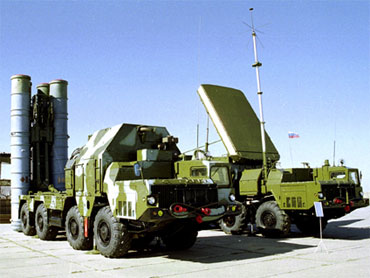 The Fars news agency, which has ties to Iran's elite Revolutionary Guard, Iran's most powerful military force, said Iran received two S-300s from Belarus and two others from another unspecified source. Fars didn't elaborate, and there was no official confirmation of the report.

Russia signed a 2007 contract to sell the S-300s, but so far has not delivered. The powerful, long-range missiles would significantly boost Iran's defense capability, and Israel and the United States have strongly objected to the deal.

The S-300 is capable of shooting down aircraft, cruise missiles and ballistic missile warheads at ranges of over 90 miles and at altitudes of about 90,000 feet.

The report comes as Iran faces increasing pressure from the West over its nuclear program.

The U.S. accuses Tehran of seeking to build an atomic weapon, a claim Iran denies. The United Nations has imposed four rounds of financial sanctions on Tehran for its refusal to halt uranium enrichment, a process that can be used to produce fuel for a reactor or a warhead. Iran says it has a right to conduct enrichment for what it says is its peaceful nuclear program.

Moscow said in June that the latest round of U.N. sanctions would prevent it from delivering the S-300s to Iran. The U.S. State Department said that Washington appreciates Russia's restraint.

But last month, Sergei Chemezov, the head of the state-owned industrial giant Russian Technologies, said the contract for the delivery of S-300s to Iran had not been annulled yet pending a decision by President Dmitry Medvedev.

Asked to comment on the Iranian report, Vyacheslav Davidenko, a spokesman for the Russian state arms trader Rosoboronexport, said that his company hadn't delivered any S-300s to Iran. "We are abiding by the U.N. sanctions," he said.

Officials in Belarus refused to comment on the report.

Belarusian President Alexander Lukashenko has forged close ties with Tehran, and Iranian President Mahmoud Ahmadinejad, who visited the ex-Soviet nation in 2007, has called the Belarusian leader one of his best friends.

Former Belarus' leader Stanislav Shushkevich, now an opposition politician, said that Russia in the past has used Belarus as a conduit for weapons deliveries to rogue nations.

"Belarus might well have used the established "gray" schemes to deliver S-300s to Iran," Shushkevich told The Associated Press. "The deliveries of S-300s from Belarus to Iran would have been absolutely impossible without Russia's knowledge and sanction."

Iran has insisted that Moscow is under an obligation to carry out the contract to provide the S-300 missiles to Tehran.

The agency said Iran's possession of the missiles was revealed for the first time last year by Al-Menar TV, which is affiliated the Iranian-backed Islamic militant Hezbollah group in Lebanon. Fars said Iranian government officials never denied the report.

It added that Iran may try to start building the missiles itself.

Russia — which has sold other air-defense missiles, aircraft and other weapons to Iran — is in a difficult position in the international standoff with Iran, in part because it does not want to jeopardize decades of political and trade ties with the Islamic republic.