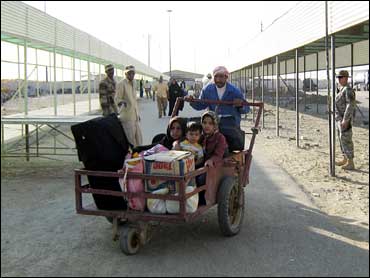 A Kurdish official says Iran closed major border crossings with northern Iraq on Monday to protest the U.S. detention of an Iranian official the military has accused of weapons smuggling.

At least four border gates had been closed, with just one remaining open in a move that will severely curtail trade between the two countries, the governor of the Kurdish province of Sulaimaniyah, Dana Ahmed Majeed, told The Associated Press.

At least four border gates have been closed and one remains open, the governor of the Kurdish province of Sulaimaniyah, Dana Ahmed Majeed, told The Associated Press. The move threatens the economy of Iraq's northern region - one of the country's few success stories.

In Tehran, the public relations department in Iran's Interior Ministry said no decision had been taken to shut the border.

But Kurdish authorities said the Iranians began shutting down the crossing points late Sunday near the border towns of Banjiwin, Haj Omran, Halabja and Khanaqin.

The move came four days after U.S. troops arrested an Iranian official during a raid on a hotel in Sulaimaniyah, 160 miles northeast of Baghdad.

U.S. officials said he was a member of the elite Quds force of the Iranian Revolutionary Guards that smuggles weapons into Iraq. But Iraqi and Iranian leaders said he was in the country on official business and with the full knowledge of the government.

"This closure from the Iranian side will have a bad effect on the economic situation of the Kurdish government and will hurt the civilians as well," said Jamal Abdullah, a spokesman for the autonomous Kurdish government. "We are paying the price of what the Americans have done by arresting the Iranian."

Iraqi President Jalal Talabani, a Kurd, also has protested the detention Thursday by U.S. troops of the Iranian in the Kurdish city of Sulaimaniyah. Talabani demanded the Iranian's release, warning the arrest could affect relations between the two neighbors.

Iranian Foreign Ministry spokesman Mohammad Ali Hosseini said the man, who has been identified as Mahmudi Farhadi, was in charge of border transactions in western Iran and went to Iraq on an official invitation.

The U.S. military said the suspect was being questioned about "his knowledge of, and involvement in," the transportation of EFPs and other roadside bombs from Iran into Iraq and his possible role in the training of Iraqi insurgents in Iran. No charges against the Iranian have been filed yet.

Monday's raid in the Shiite neighborhood of Sadr City came on the heels of accusations that Iran is smuggling surface-to-air missiles and other advanced weapons into Iraq for use against American troops, and increasing protests by Iraqi officials over Farhadi's detention.

His arrest has taxed relations between Iraq and the U.S., already strained after the shooting deaths of 11 civilians at Nisoor Square in Baghdad on Sept. 16 - allegedly at the hands of Blackwater USA security contractors.

Prime Minister Nouri al-Maliki has said the Blackwater incident was among several "serious challenges to the sovereignty of Iraq" by the company, adding he will take the case up in discussions with President Bush in New York, when the two meet on the sidelines of the U.N. General Assembly.

Al-Maliki also condemned the Iranian's arrest, saying he understood Farhadi had been invited to Iraq.

"The government of Iraq is an elected one and sovereign. When it gives a visa, it is responsible for the visa," al-Maliki told The Associated Press in an interview Sunday in New York. "We consider the arrest ... of this individual who holds an Iraqi visa and a (valid) passport to be unacceptable."

The military said the suspects targeted in Monday's raid were believed to be Iranian-backed rogue Shiite fighters. During the raid, U.S. troops were engaged with at least one armor-piercing explosively formed penetrator, or EFP, weapons that the military says have been brought in from Iran and killed hundreds of American troops in recent months.

Tehran denies the allegations, saying it is promoting stability in Iraq, not fueling the violence.

Sadr City is a stronghold of the Mahdi Army. The militia is nominally loyal to the radical cleric Muqtada al-Sadr but disaffected factions have broken off from the group in recent months to battle U.S. troops in the neighborhood.

Iranian President Mahmoud Ahmadinejad denied his country was aiding Shiite militias in an interview with CBS' 60 Minutes that aired Sunday.

"We don't need to do that. We are very much opposed to war and insecurity," Ahmadinejad told 60 Minutes correspondent Scott Pelley in the interview aired Sunday.

Ahmadinejad arrived in New York Sunday to attend the U.N. General Assembly. "The insecurity in Iraq is detrimental to our interests."

Rising tensions between Iran and the United States have worried Iraqi officials - many of whom are members of political parties with close ties to Tehran.