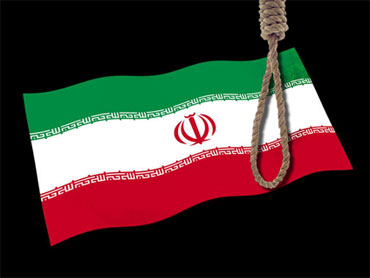 The report identified the two men as Mohammad Reza Ali Zamani and Arash Rahmanipour and said they were convicted of trying to topple "the Islamic establishment" and for membership of armed opposition groups.

News of the executions first came in a report by the semiofficial news agency Isna but was later reported by the state TV Web site and other media.

Iran has put on trial more then 100 political activists and figures since August.

Some of the nine death sentences, according to the TV Web site report, were related to deadly clashes on Dec. 27. At least eight people were killed that day in clashes between police and protesters on the streets. It was the worst violence since authorities launched a harsh crackdown against the opposition in the summer.

Zamani and Rahmanipour are believed to be among the five sentenced to death in October. They were hanged at dawn Thursday after an appeals court upheld their death sentences, according to the TV Web site.

The opposition says President Mahmoud Ahmadinejad won the June presidential election through fraud. Hundreds of thousands have poured into the streets in Iran since then on various occasions to support Ahmadinejad's main challenger, opposition leader Mir Hossein Mousavi.

Dozens of protesters were killed in the unrest and hundreds detained since June.

The charge of membership of armed groups opposed to the Tehran ruling establishment is widely taken to be a reference the Mujahedeen Khalq Organization, or MEK, as well as groups loyal to the Western-backed monarchy toppled by the 1979 Islamic revolution.

MEK fought Iran's monarchy in the 1960s and the current Islamic establishment in the 1980s. It moved its base to neighboring Iraq soon after 1979 revolution and is said to have provided Americans with intelligence on Iran. The U.S. lists MEK as a terrorist organization, but the European Union removed it from its terror list last year.

Iran has accused both groups of involvement in the assassination this month of an Iranian physicist.