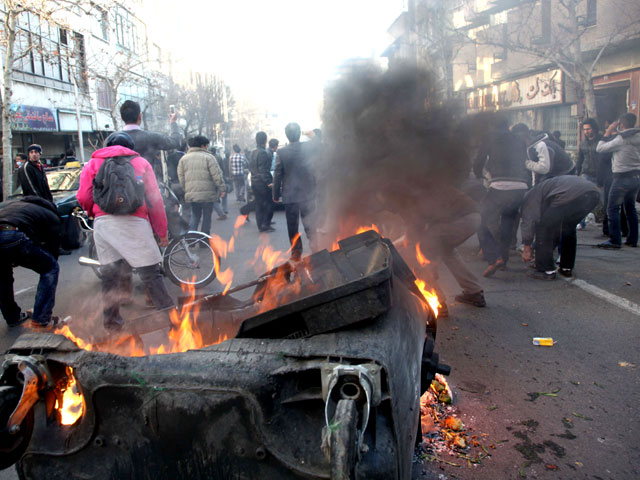 Egypt's revolution continues to inspire opposition movements throughout the Middle East. There were anti-government protests today in Iran, Yemen and Bahrain, which organizers there called a "day of rage."

Police fired rubber bullets and used tear gas to disperse crowds in the capital of the tiny Arab island kingdom. At least one person was killed. The protesters are demanding more freedom. The king had recently tried to buy their support by offering every family thousands of dollars in cash. Bahrain is home to the U.S. Navy's fifth fleet.

In Iran, Monday's protests were among the most violent since the disputed 2009 election. CBS News correspondent Mark Phillips reports that at least one person was killed there as well.

The pro-government Fars News Agency reported that a bystander was shot dead at the hands of protesters. Eyewitnesses said at least three protesters injured by bullets were taken to a hospital in central Tehran while dozens of others were hospitalized because of severe wounds as a result of being beaten.

"An Iranian dies but doesn't accept humiliation," demonstrators chanted. "Death to the dictator," they said, in a chant directed at hard-line President Mahmoud Ahmadinejad.

Security forces on motorcycles could also be seen chasing protesters through the streets, according to eyewitnesses.

Fars, which is linked to the Revolutionary Guard, Iran's most powerful military force called protesters "hypocrites, monarchists, ruffians and seditionists," and ridiculed them for not chanting any slogans about Egypt as they had originally promised.

The agency added that an unspecified number of protesters were arrested and handed over to police and security officials.

Opposition website kaleme.com reported that similar rallies took place in the central city of Isfahan and Shiraz in the south. Security forces used force to disperse them as well.

Following the announcements by the opposition that they would attempt to hold a new rally in solidarity with the Egypt uprising, Iran's security forces cut phone lines and blockaded the home of an opposition leader in attempts to stop him attending the planned rally.

Police and militiamen poured onto the streets of Tehran to challenge the marches, which officials worry could turn into demonstrations against Iran's ruling system.

With Iran under a media lockdown, the only glimpses of the unrest came via cell phone video. It shows the crowds were big, they were angry and they were emboldened by events in Egypt.

"Whether Cairo or Tehran," they chant, "death to the oppressors."

At one point, protestors start to deface a poster of Iran's Supreme leader Ayatollah Khamenei. When a government supporter steps in, the mob turns on him. However, eyewitness say the vast bulk of the violence came from police and paramilitaries.

This is the first time opponents of the regime have moved back onto the streets since a brutal government crackdown two years ago.

The protests in Iran also come just three days after Ahmadinejad praised the protestors in Egypt for, he claims, following Iran's revolutionary lead.

"What we see happening in Iran is a testament to the courage of the Iranian people and an indictment of the hypocrisy of the Iranian regime," said Secretary of State Hillary Clinton.

Once again, the fires of anger are burning in Iran.