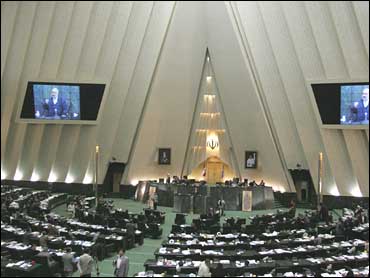 Iran's parliament on Saturday approved a nonbinding resolution labeling the CIA and the U.S. Army "terrorist organizations," in apparent response to a Senate resolution seeking to give a similar designation to Iran's Islamic Revolutionary Guard Corps.

"The aggressor U.S. Army and the Central Intelligence Agency are terrorists and also nurture terror," said a statement by the 215 lawmakers who signed the resolution at an open session of the Iranian parliament. The session was broadcast live on state-run radio.

The resolution, which is seen as a diplomatic offensive against the U.S., urges Iranian President Mahmoud Ahmadinejad's government to treat the two as terrorist organizations. It also paves the way for the resolution to become legislation that - if ratified by the country's hardline constitutional watchdog - would become law. The government is expected to wait for U.S. reaction before making its decision.

On Wednesday, the Senate voted 76-22 in favor of a resolution urging the State Department to designate Iran's Islamic Revolutionary Guard Corps a terrorist organization. While the proposal attracted overwhelming bipartisan support, a small group of Democrats said they feared labeling the state-sponsored organization a terrorist group could be interpreted as a congressional authorization of military force against Iran.

The Bush administration had already been considering whether to blacklist an elite unit within the Revolutionary Guard, subjecting part of the vast military operation to financial sanctions.

The U.S. legislative push came a day after Ahmadinejad told world leaders at the U.N. General Assembly that his country would defy attempts to impose new sanctions by "arrogant powers" seeking to curb its nuclear program, accusing them of lying and imposing illegal penalties on his country.

He said the nuclear issue was now "closed" as a political issue and Iran would pursue the monitoring of its nuclear program "through its appropriate legal path," the International Atomic Energy Agency, which is the U.N.'s nuclear watchdog.

Tensions between the U.S. and Iran have escalated over Washington's accusations that Iran is secretly trying to develop nuclear weapons and has been supplying Shiite militias in Iraq with deadly weapons used to kill U.S. troops. Iran denies both of the allegations.