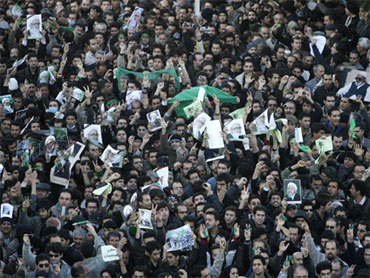 Written by By Iason Athanasiadis - Special to GlobalPost

In the struggle currently gripping the streets of the Islamic Republic, an upcoming anniversary could prove significant.

Jan. 16 marks 31 years since the Shah of Iran fled his country, effectively handing victory to the revolution led by Ayatollah Roohollah Khomeini. Green movement activists are hoping the date could once again be the tipping point, this time for Supreme Leader Ali Khamenei.

And as the anniversary approaches, Tehran isn't the only city to watch. Historical precedent suggests that revolutions can start in provincial cities not thought to be hotbeds rebellious activity.

On Dec. 15, 1989, a disturbance in a small Romanian team led to a massacre that became the long-awaited catalyst for the overthrow of the Ceausescu dynasty, the last Communist regime in Eastern Europe.

The protest in the town of Timisoara escalated into the shooting dead of nearly 100 demonstrators by Romanian government troops. Nicolai Ceausescu hurried back from a foreign trip - ironically enough to the Islamic Republic of Iran - just in time to be captured by revolutionary forces, put on trial and summarily executed. This may prove relevant to the current situation in Iran because it shows that a government can be toppled by demonstrations that start in provincial cities rather than the capital city.

"In that case also, most people were expecting things to mainly be driven by the capital city but heroes were discovered in the most unlikely places," said a Tehran-based political analyst who requested anonymity for fear of a regime backlash for speaking to foreign media. "When we look back at the course of events in a few years, a lot of events like the one in Najafabad that may seem less significant at this current juncture will suddenly gain great significance."

Najafabad is a conservative Iranian town and the birthplace of Grand Ayatollah Ali Montazeri, one of Iran's top religious authorities and the spiritual head of the opposition movement. His death of natural causes in December led to the traditional city erupting in anti-regime protests. At least five people were killed in the ensuing unrest and the Islamic Republic was forced to declare martial law for the first time since the 1979 revolution.

"The clergy are generally very conservative and pretty scared of taking chances so it was interesting that Qom flared up as well," said the Tehran-based analyst. "The challenge in smaller cities is that they're easier to control, both from a policing point of view but also because the smaller population makes it more difficult for the protesters to remain anonymous."

Another precedent was set by the level of violence exhibited on the last Sunday in December. Government forces killed at least 37 people in countrywide protests, the worst single-day death toll since the disputed presidential elections in June.

"It was a turning point," said Thierry Coville, an associated research fellow at the Paris-based IRIS (research center for international and strategic studies). "The violence of the riots has stricken the imagination of the people and the conservatives and reformists now know that the situation could take a very dangerous turn.

"The radicalism of the slogans addressed to Khamenei shows that the legitimacy of the regime is now attacked and it is no more about the election," said Coville.

In fact, the slogans suggest that demonstrators on the streets of Tehran would like nothing better than to see Ayatollah Khamenei step down from his post as the supreme leader. An unverified letter circulating on the internet and purporting to have been issued by Iran's National Security Council specifies provisions for checking Khamenei's private plane in the event he decides to leave the country. Even after the letter was exposed as a fraud, hopeful Iranians continue to forward it to each other.

At the end of December the Ahmadinejad government appeared fully out of touch with the population when it launched assaults on demonstrators during Ashura, a traditional holiday of mourning for martyrs.

"The current regime has broken the social bonds that tie it to the public and thus is eventually due to fall," said Bill Beeman, a Persian-speaking Iran expert who is professor at the department of anthropology at the University of Minnesota and former president of the Middle East section of the American Anthropological Association. "Killing people on Ashura is a complete symbolic disaster. Even the Shah didn't execute prisoners on Ashura - and these folks are supposed to be religious!"

Demonstrators who braved the streets of Tehran on Ashura witnessed crowds viciously attacking the police and spoke of a tipping point being breached in the balance of fear between the authorities and the people.

"What grabbed me was the look in the eyes of the soldiers standing in the streets," said one witness. "You could easily notice grief, guilt and fear in most of them."

But the regime still has thousands of loyalists willing to take to the streets to defend what they consider to be a sacred institution: the velayat-e faghih (Supreme Jurisprudent) who heads the regime.

"The plainclothes riding their bikes in flocks of 50 maneuvered like villains out of action comic strips and had sparkles of joy in their eyes as if they were celebrating their authority over the streets," the same witness said. "It was horribly frightening, they all looked mentally ill."

The regime moved on the counterattack last week, threatening to arrest opposition leaders Mousavi, Mohammad Khatami and Mehdi Karroubi, and using the pulpit to denounce demonstrators as "apostates." Pro-regime websites published images of individuals the intelligence ministry is seeking and reported that Ayatollah Sanei, the successor of Grand Ayatollah Montazeri as the movement's spiritual leader, was stripped of his title.

"After the Ashura events, a lot of people have begun feeling that there is indeed some progress being made in terms of really scaring the system," said the Tehran-based analyst. "But nobody knows whether the system getting scared is going to lead to them making more compromises or cracking down even harder."

More stories from GlobalPost:
Festival Turns Deadly in Iran
Protesters and Riot Police Clash
Is Iran on the Verge of a Popular Explosion?