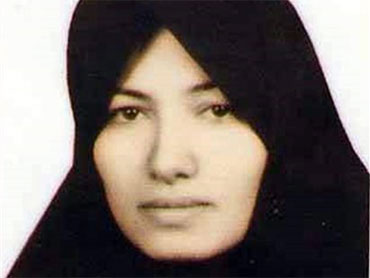 Iranian state television has broadcast a purported confession by an Iranian woman who had faced death by stoning for adultery, a case that has drawn statements of concern by the U.S. administration.

The stoning sentence against Sakineh Mohammadi Ashtiani was commuted last month after international outrage over the brutality of the punishment, but she still faces a possible death sentence by other means.

A woman identified as Ashtiani said in the interview broadcast late Wednesday that she was an unwitting accomplice to her husband's murder.

The woman's face was blurred and her words were voiced over in what the TV report said was a translation into Farsi from Azeri Turkish, which is spoken in parts of Iran.

The outcry over the death sentence is one of the latest thorns in Iran's relationship with the international community, as the United States, Britain and international human rights groups have urged Tehran to stay the execution.

In the interview, the woman also criticized her lawyer, Mohammad Mostafaei, for publicizing her case.

Mostafaei maintained a blog that sparked a worldwide campaign to free his client. In July, Iranian authorities said they would not carry out the stoning sentence for the time being, but the woman could still face execution by hanging for her conviction of adultery and other offenses.

The lawyer fled to Norway, where he has applied for asylum while expressing hope he can someday return to Iran.

Human Rights Watch has said Ashtiani was first convicted in May 2006 of having an "illicit relationship" with two men following the death of her husband - for which a court in Tabriz, in northwestern Iran, sentenced her to 99 lashes. Later that year she was also convicted of adultery, despite having retracted a confession which she claims was made under duress.

Stoning was widely imposed in the years following the 1979 Islamic revolution, and even though Iran's judiciary still regularly hands down such sentences, they are often converted to other punishments.

The last known stoning was carried out in 2007, although the government rarely confirms that such punishments have been meted out.

Under Islamic rulings, a man is usually buried up to his waist, while a woman is buried up to her chest with her hands also buried. Those carrying out the verdict then throw stones until the condemned dies.

Ashtiani's stoning was approved by the country's Supreme Court, but the law could allow the judiciary head to order another trial or appeal for a pardon from Iran's Supreme Leader Ayatollah Ali Khamenei, who has final say on all state matters.