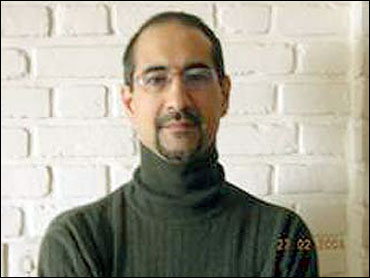 Iran's government-run news agency says the Tehran government has released Kian Tajbakhsh, an Iranian-American academic held in prison since May on charges of endangering Iran's security.

"Kian Tajbakhsh was released from prison on bail," reported the Islamic Republic News Agency, quoting a spokesman for the Iranian judiciary. The Agency said the bail was set at about $110,000.

IRNA says Tajbakhsh, an urban planning consultant, will not be allowed to leave Iran unless a judge decides to give him departure permission.

Tajbakhsh is a consultant with the Soros Foundation's Open Society Institute, which directs funds and projects to encourage and maintain the creation of democratic societies based on principles including the rule of law, human rights, freedom of the press, and market economics.

His release from jail follows the August release of another Iranian-American academic. Haleh Esfandiari, who was held for eight months in a notoriously harsh Tehran prison, was allowed to fly to Austria on September 3rd and arrived back in the U.S. a few days later.

"After a long and difficult ordeal, I am elated to be on my way back to my home and my family. These last eight months, that included 105 days in solitary confinement in Evin Prison, have not been easy," said Esfandiari, 67, in a statement issued by her employer, the Woodrow Wilson International Center for Scholars. "But I wish to put this episode behind me and to look to the future, not to the past."

The Iranian Intelligence Ministry has accused Esfandiari and her Washington-based foundation of trying to set up networks of Iranians with the ultimate goal of creating a "soft revolution" in Iran. Esfandiari's family and the Wilson Center, where she is head of the Middle East program, have denied the allegations against her.

The U.S. accuses Iran of arming Shiite Muslim militants in Iraq and seeking to develop nuclear weapons. Tehran denies those claims, and blames the U.S. for Iraq's instability.

Iranian judiciary officials have not provided answers on Esfandiari's legal status since her release. It is unclear if she will be asked to return to Iran to appear in court.

Esfandiari was released on bail Aug. 21 from Evin prison, where she was held since May. Her 93-year-old mother used the deed to her Tehran apartment to post bail.

The Wilson Center says Esfandiari was first detained Dec. 30 after three masked men holding knives threatened to kill her on her way to Tehran's airport to fly back to the U.S. from visiting her mother.

In January, her passport was taken away. For weeks, she was interrogated by authorities for up to eight hours a day about the activities of the Center's Middle East Program, the center said.

Iran has charged two other Iranian-Americans with security-related offenses: Ali Shakeri, a founding board member of the Center for Citizen Peacebuilding at the University of California, Irvine, who is in jail; and Parnaz Azima, a journalist for U.S.-funded Radio Farda, who is not in jail but is also not allowed to leave the country.

In July, Iran's state TV broadcast a video in which Esfandiari said a network of foreign activists was trying to destabilize Iran and bring about "essential" social change. Tajbakhsh, who also featured in the video, said that his organization tried to create a "gap between the government and the nation."

The Wilson Center and the Open Society Institute criticized the Iranian government for the broadcast and dismissed the statements as "coerced."