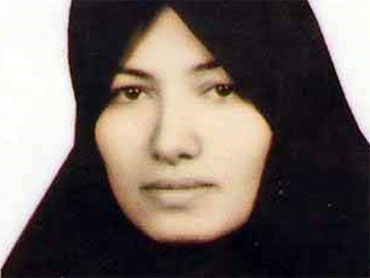 A lawyer for an Iranian woman who had faced death by stoning on an adultery conviction said Thursday he suspects she was tortured into confessing that she was an unwitting accomplice to her husband's murder.

Iranian state television broadcast the purported confession of Sakineh Mohammadi Ashtiani, 43, on Wednesday night in an apparent attempt to deflect criticism of her case by the U.S., other countries and rights groups. Instead of the adultery charge, it focused on allegations she was involved in murder - something the U.S. and other countries also punish by death.

Human Rights Watch has said Ashtiani, a mother of two, was first convicted in May 2006 of having an "illicit relationship" with two men after the death of her husband and was sentenced by a court to 99 lashes. Later that year, she was also convicted of adultery and sentenced to be stoned to death, even though she retracted a confession that she claims was made under duress.

Iran last month lifted the stoning sentence for the time being after international outrage over the brutality of the punishment. Iran says Ashtiani has also been convicted of involvement in the murder of her husband. She could still be executed by hanging.

The outcry over the case is the latest source of friction between Iran and the international community, with the United States, Britain and human rights groups urging Tehran to stay the execution. U.S. Secretary of State Hillary Rodham Clinton called on Iran this week to release all political prisoners and expressed alarm about several specific detainees, including Ashtiani. Brazil, which has friendly relations with Iran, offered her asylum.

In the broadcast, the woman identified as Ashtiani said she unwittingly played a role in her husband's murder. Her face was blurred and a woman who was not seen translated her words into Farsi from Azeri Turkish, which is spoken in parts of Iran.

"I established telephone contacts with a man in 2005," she said. "He deceived me by his language. ... He told me, 'Let's kill your husband.' I could not believe at all that my husband would be killed. I thought he was joking. ... Later I learned that killing was his profession." She said the man, whom she did not identify, brought electrical devices, wire and gloves to her house and electrocuted her husband while she watched.

Malek Ajdar Sharifi, a senior judiciary official, was quoted by state TV as part of the same report as alleging that Ashtiani had given her husband an injection that left him unconscious, then the man attached electrical devices to his neck and killed him.

Sharifi also said Ashtiani sent her children out of the house to clear the way for her husband's murder.

Ashtiani's lawyer, Javid Houtan Kian, denied she has ever been charged with murder or brought to trial over her husband's killing in 2005.

"She was tortured to make those confessions," he told The Associated Press in a telephone interview. He came to that conclusion, he said, because she has never before admitted to any role in the murder.

The lawyer said the man's killer spent three years in prison and is now free after a pardon from Ashtiani's children.

Rights groups criticized the broadcast of her statement, calling it one of many forced confessions in Iran's justice system.

"This so-called confession forms part of growing catalog of other forced confessions and self-incriminating statements made by many detainees in the past year," said Hassiba Hadj Sahraoui, Amnesty International's deputy director for the Middle East and North Africa.

Kian said he was not allowed to meet with his client since the broadcast confession.

"I was told that my client is barred from receiving people," he said.

In the broadcast, the woman also criticized her previous lawyer, Mohammad Mostafaei, for publicizing her case.

"Why did he televise the case? Why did he discredit me before my family members and relatives who didn't know I'm in jail?" she said. "Now, I have a complaint against him."

Mostafaei maintained a blog that sparked a worldwide campaign to free his client. In July, Iranian authorities said they would not carry out the stoning sentence for the time being. The lawyer fled to Norway, where he has applied for asylum.

Stoning was widely imposed in the years after the 1979 Islamic revolution, and even though Iran's judiciary still regularly hands down such sentences, they are often converted to other punishments.

The last known stoning was carried out in 2007, although the government rarely confirms that such punishments have been meted out.

Under Islamic rulings, a man is usually buried up to his waist, while a woman is buried up to her chest with her hands also buried. Those carrying out the verdict then throw stones until the condemned dies.

Ashtiani's stoning was approved by the country's Supreme Court, but the law could allow the judiciary head to order another trial or appeal for a pardon from Iran's Supreme Leader Ayatollah Ali Khamenei, who has final say on all state matters.