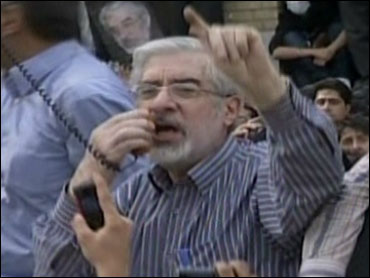 Iran's opposition leader on Friday pledged to remain defiant in the face of new threats - including calls by hard-liners for his execution - and said he was ready to sacrifice his life in defense of the people's right to hold peaceful protests against the government.

Iran's state prosecutor on Thursday warned opposition leaders could be put on trial if they don't denounce this week's anti-government protests.

Iranian hard-liners have called for the execution of Mousavi and other opposition figures, while a previously unknown group claimed in an online posting that suicide squads were ready to assassinate opposition leaders should the judiciary fail to punish them within a week.

In one of his strongest statements to date, Mousavi on Friday said he was "ready for martyrdom" - the sacrifice of one's life for a higher cause - and lashed out at the bloody crackdown the authorities are waging against the opposition.

He said the government was making more mistakes by resorting to violence and killings, and that it must accept the people's rights to hold peaceful demonstrations.

"I explicitly and clearly state that an order to execute, murder and imprison (opposition leaders) ... won't resolve the problem," Mousavi said in a statement on his Web site, Kaleme. "I'm not afraid to be one of the martyrs people have offered in the struggle for their just demands."

Iran's internal turmoil has grown increasingly bitter. The confrontation between clerical rulers and their opponents returned to the streets in recent weeks, after a harsh crackdown immediately following the June 12 balloting all but crushed the opposition movement.

One of those killed in clashes between security forces and opposition protesters on Sunday, when Shiite Muslims marked the sacred day of Ashoura, was Mousavi's nephew, Ali Mousavi.

He was buried Wednesday in a hastily organized ceremony that was attended by the opposition leader and other family members. Authorities had taken the body from the hospital earlier in the week in what was seen as an attempt to prevent the funeral from turning into another pro-opposition protest.

Sunday's unrest was followed by two days of pro-government protests Wednesday and Thursday in which crowds chanted calls for the execution of Mousavi, and another opposition figure, Mahdi Karroubi.

Both Mousavi and Karroubi were losing candidates in the June election, in which Mahmoud Ahmadinejad was declared the winner. The opposition argues the election was rigged and that Ahmadinejad won by fraud.

Some government supporters at the two days of rallies wore white funeral shrouds to symbolize a willingness to die in defense of Iran's clerical rulers. Several hundred turned out for demonstration Thursday in southern Tehran outside the offices of Supreme Leader Ayatollah Ali Khamenei, state radio reported.

In his statement Friday, Mousavi also denounced hard-liners who he said preached violence from state-funded podiums in the name of Islam.

"Encouraging the killing of people ... is a tragedy carried out by specific individuals and the state TV," he said, adding that efforts to silence the opposition "through arrests, violence and threats," would not succeed.