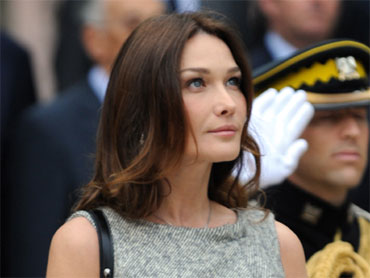 Iranian state media called France's first lady, Carla Bruni-Sarkozy, a "prostitute" on Monday in an unusual attack on the wife of a world leader that shows deep anger over her support for an Iranian woman who faced death by stoning on an adultery conviction.

The wife of French President Nicolas Sarkozy has condemned the stoning sentence against Sakineh Mohammadi Ashtiani, which Iran temporarily suspended but did not throw out after an international outcry.

Ashtiani, a 43-year-old mother of two, could still face execution by stoning or hanging after a final review of her case, her lawyer, Javid Houtan Kian, told The Associated Press Monday.

The Kayhan newspaper, whose editor is a representative of Supreme Leader Ayatollah Ali Khamenei, described Bruni-Sarkozy as a "prostitute" on Saturday in an article headlined "French prostitutes enter the human rights uproar."

"Although Bruni, the morally corrupt singer and actress of Italian (origin), was able to break the Sarkozy family and marry the French president, lately new reports have emerged about her affair with a singer," said the weekend report in Kayhan.

The French president's office declined to comment on the remarks.

The media attack was in response to an open letter Bruni-Sarkozy wrote to Ashtiani that was printed in several French news outlets last week.

"How to remain silent after learning of the sentence against you?" Bruni-Sarkozy wrote, adding that the stoning would "deeply wound all women, all children, all those who have feelings of humanity."

"Deep within your jail cell, know that my husband will plead your cause tirelessly and that France will not abandon you," she wrote.

Ashtiani was convicted in May 2006 of having an "illicit relationship" with two men after the murder of her husband and was sentenced to 99 lashes. Later that year, she was convicted of adultery and sentenced to be stoned, even though she retracted a confession she claims was made under duress.

Iran last month stayed her stoning, but authorities now say she has also been convicted of being an accomplice in her husband's murder. In a purported confession aired on state TV early this month, Ashtiani admits to unwittingly playing a role in the 2005 killing. She could also face a separate death sentence in that case.

Her lawyer denies Ashtiani was ever charged with murder or brought to trial in her husband's killing.

Protesters in cities across the globe have denounced the stoning sentence. About 300 people from rights organizations demonstrated in Paris Saturday to urge Iran to lift her death sentence.

"The stoning verdict has only been delayed, not halted," Kian, Ashtiani's lawyer, said in a telephone interview Monday. 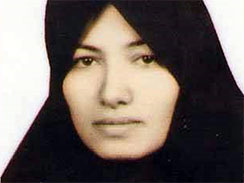 (AP Photo/Amnesty International)
The woman's previous lawyer, who brought the case to the world's attention in his blog, fled the country and received asylum in Norway after Iranian authorities began to pressure him and his family.

Kian said he, too, was coming under pressure. He said authorities broke into his home Sunday.

"Intelligence agents beat the guard of the residential complex where I live and broke into my home in my absence," he said. "They took my computer, which contained the files of my clients, including Ashtiani."

Kian said authorities have stopped him and Ashtiani's two children from meeting her ever since her purported confession.

"Authorities say I'm banned from meeting my client. And they have told Ashtiani's two children that their mother didn't want to see them," he said.
By Associated Press Writer Ali Akbar Dareini; AP Writer Angela Doland contributed to this report