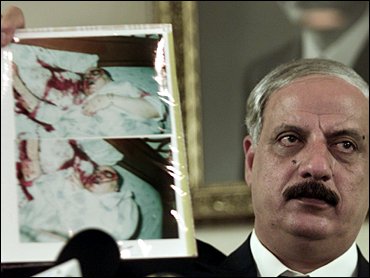 In an interview with CBS News Anchor Dan Rather, Iraqi Deputy Prime Minister Tariq Aziz offered no other details on the manner of the terrorist's death. Aziz said an Iraqi official would give more information about the death of the Palestinian guerrilla chief on Wednesday.

Aziz's remarks were the first Iraqi confirmation of Abu Nidal's death. Previous accounts of his death have come from Palestinian sources.

On Tuesday, a senior Palestinian source told Reuters that Abu Nidal was killed or committed suicide when Iraqi security men confronted him over his anti-government activity.

In response to a question from Rather, Aziz denied that Abu Nidal had been involved in a plot to kill Iraqi leader Saddam Hussein, but he also said the Palestinian was "violating the Iraqi national interest."

He offered no details.

Aziz also denied that Iraq had harbored the man who was once branded the world's most dangerous terrorist by the State Department.

Instead, Aziz claimed that Abu Nidal had illegally entered Iraq through Iran.

"We did not give him sanctuary. He entered Iraq secretly," Aziz asserted.

Abu Nidal was once the world's most prolific and hotly pursued guerrilla mastermind, unsurpassed in notoriety perhaps until the emergence of Osama bin Laden.

"He has known many secrets of Arab leaders, especially Saddam Hussein and Libya's Colonel Gaddhafi, so maybe someone wanted to get rid of him," Melman told CBS Radio News, adding that Abu Nidal would have had many enemies.

In Tuesday's satellite interview, with Rather in New York and Aziz in Baghdad, the Iraqi official also referred to Palestinian suicide bombers as "heroes."

"These are heroes who are struggling to liberate the occupied territory we respect them, we respect them because they are sacrificing their lives for a noble cause, they are not terrorist, they are heroes. And heroines. And this is what we believe in, it's not only myself, every educated honest person in the Arab world, in the Muslim world believes that these people are heroes."

Aziz said that a U.S.-led invasion of Iraq "does not serve the basic interests" of the United States, which he said has come too much under the sway of Israel.

"Well I would like to say that this war which the Bush government is a planning does not serve the basic interest in the long run of the American nation. It serves the imperialistic interest of Israel and the Zionist groups who have now a great say in the American policy."