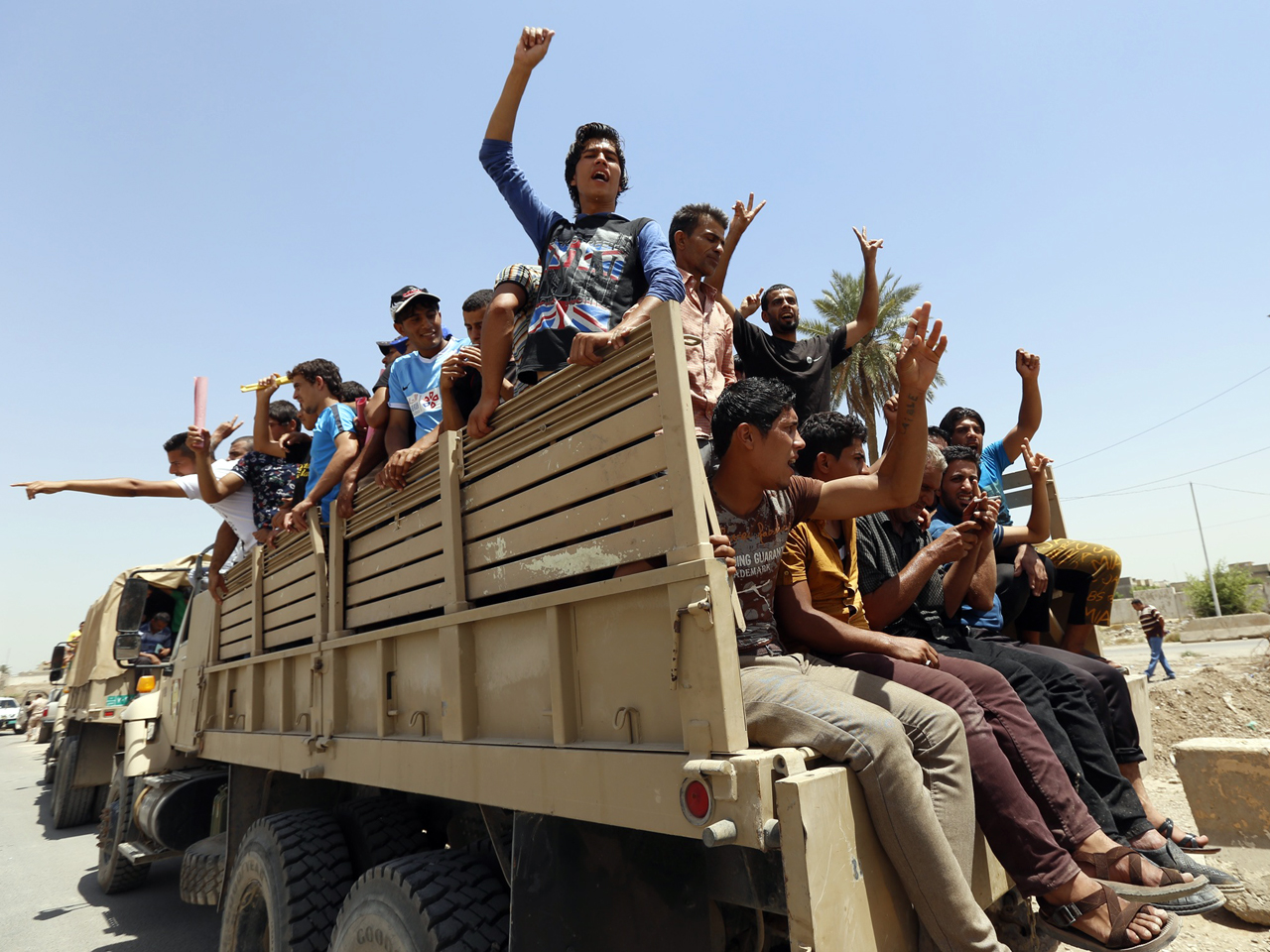 BAGHDAD -- Hundreds of young Iraqi men gripped by religious and nationalistic fervor streamed into volunteer centers Saturday across Baghdad, answering a call by the country's top Shiite cleric to join the fight against Sunni militants advancing in the north.

"By God's will, we will be victorious," said one volunteer, Ali Saleh Aziz. "We will not be stopped by the ISIL or any other terrorists."

The massive response to the call by the Iranian-born Grand Ayatollah Ali al-Sistani, issued via his representative Friday, comes as sectarian tensions are threatening to push the country back toward civil war in the worst crisis since U.S. forces withdrew at the end of 2011.

CBS News correspondent Clarissa Ward reports from Baghdad that many Iraqis are trying to flee the country as the security situation disintegrates. The departure hall at the capital city's airport was packed Friday.

[CBS News will be covering the latest developments extensively tonight on the "CBS Evening News," with Clarissa Ward in Baghdad and Holly Williams in Erbil, Iraq.]

In the U.S., Defense Secretary Chuck Hagel ordered the aircraft carrier USS George H.W. Bush to move from the North Arabian Sea into the Persian Gulf, which CBS News national security correspondent David Martin reported Friday was expected to happen. The Bush is carrying fighter jets that could easily get to Iraq.

"The order will provide the commander in chief additional flexibility should military options be required to protect American lives, citizens and interests in Iraq," Rear Adm. John Kirby said in a statement Saturday.

Fighters from the al Qaeda splinter group, drawing support from former Saddam Hussein-era figures and other disaffected Sunnis, have made dramatic gains in the Sunni heartland north of Baghdad after overrunning Iraq's second-largest city of Mosul on Tuesday. Soldiers and policemen have melted away in the face of the lightning advance, and thousands have fled to the self-ruled Kurdish region in northern Iraq.

"I cannot understand how all these soldiers gave up so quickly," a man who claimed he was part of a unit that did try to fight told CBS News. "A battalion is supposed to at least resist for a few days."

On Saturday, insurgents seized the small town of Adeim in Diyala province after Iraqi security forces pulled out, said the head of the municipal council, Mohammed Dhifan. Adeim is about 60 miles north of Baghdad. There was no official confirmation of the loss of the town.

Jawad al-Bolani, a lawmaker and former Cabinet minister close to Prime Minister Nouri al-Maliki, said a military offensive was underway Saturday to drive the insurgents from Tikrit, Saddam's hometown north of Baghdad, although fighting in the area could not be confirmed.

AP Television News footage showed Kurdish fighters, known as peshmerga, driving out militants who had taken over an army outpost some 15 miles west of the oil city of Kirkuk. The position had earlier been abandoned by Iraqi army troops. Long coveted by the Kurds who have a self-rule region in northern Iraq, Kirkuk fell under the control of the peshmerga this week after Iraqi army forces left.

Iranian President Hassan Rouhani said Saturday his Shiite nation is ready to help Iraq if asked, adding that it has "no option but to confront terrorism." Addressing a news conference, he suggested the Sunni militants in northern Iraq are linked to Iraqi politicians who lost in parliamentary elections held in April.

"We will study if there is a demand for help from Iraq. Until today, no specific request for help has been demanded. But we are ready to help within international law," he said. "Entry of our forces (into Iraq) to carry out operations has not been raised so far. It's unlikely that such conditions will emerge."

Iran has built close political and economic ties with Iraq since the 2003 U.S.-led invasion toppled Saddam's Sunni-led regime and many influential Iraqi Shiites, including al-Maliki, have spent years in exile in the Islamic Republic.

The fast-moving rebellion has emerged as the biggest threat to Iraq's stability since even before the Americans left.

Long-simmering Sunni-Shiite tensions boiled over after the U.S.-led invasion ousted Saddam in 2003, leading to vicious fighting between the two Muslim sects. But the bloodshed ebbed in 2008 after a U.S. surge, a revolt by moderate Sunnis against al Qaeda in Iraq and a Shiite militia cease-fire.

The latest bout of fighting, stoked by the civil war in neighboring Syria, has pushed the nation even closer to a precipice that could partition it into Sunni, Shiite and Kurdish zones.

Shiite cleric and political leader Ammar al-Hakim was shown on television networks donning a camouflaged military fatigue as he spoke to volunteers from his party, although he still wore his clerical black turban that designates him as a direct descendant of the Prophet Muhammad.

Extensive clips of al-Maliki's visit on Friday to the city of Samarra, home to a much revered Shiite shrine that was bombed in 2006, also were broadcast.

The footage seemed clearly aimed at rehabilitating his reputation in the eyes of Shiites, with a dour-faced al-Maliki seen praying at the Shiite shrine - an apparent reminder of his commitment to his faith and the protection of its followers. He also declared that Samarra would be the assembly point for the march farther north to drive out the militants, another decision with a religious slant to win over Shiites.

In an address to military commanders in Samarra, he warned that army deserters could face the death penalty if they don't report back to their units. But he insisted the crisis had a silver lining.

Also Saturday, the Iraqi government's counterterrorism department said the son of Saddam's vice president, Izzat Ibrahim al-Douri, was killed in an air raid by the Iraqi air force in Tikrit. It said Ahmed al-Douri was killed with some 50 other Saddam loyalists and ISIS fighters on Friday. The report could not be immediately verified.