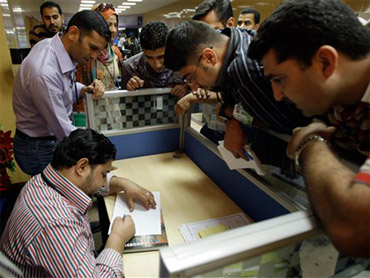 Dozens of Iraqi journalists waited hours for results in Iraq's election. What they finally got was a single CD containing all the information and instructions to make copies themselves, prompting a mad dash to the nearest Internet cafe where they paid $1.20 each to find out who was ahead in the ballot count.

It was the latest example of the disorder in Iraq's postelection count, which has fueled uncertainty and allegations of fraud. Questions about the vote's validity could undermine U.S. ambitions to set a standard for democracy in the Middle East.

All this comes as the seventh anniversary of the U.S. invasion of Iraq approaches. The war began with a missile and bombing attack on south Baghdad - dubbed "shock and awe - before dawn on March 20, 2003 - March 19 in Washington.

Protests usually mark the war's anniversary in Iraq, however, this year the country has more pressing issues to solve.

Preliminary results from Iraq's 18 provinces have trickled out daily. Generally they are released on TV screens for reporters to write down, although recently they've been handed out on CDs.

The piecemeal tallying is in stark contrast to the December 2005 parliamentary elections and last year's provincial vote, when results came in a more orderly fashion with a steady stream of updates.

International observers have lauded Iraqi officials for their overall performance but some have said little attention was paid to how much time the count would actually take.

There has also been conflicting information about when results would be released, if released at all.

One day, results were posted only to be pulled back minutes later and described as "errors." When pressed why the results were taking so long, a commission official began to respond, only to break off to take a call on his cell phone from his mother.

So far, Prime Minister Nouri al-Maliki's coalition is leading in the tight race, with 89 percent of the ballots counted.

Thursday's results show his State of Law with a roughly 40,000-vote lead over his closest competitor, former Prime Minister Ayad Allawi, a secular Shiite who heads the Iraqiya coalition. Al-Maliki also was ahead in more provinces - seven to Allawi's five - an important factor because parliament seats are apportioned by province.

However, the eventual winner is unlikely to gain the majority required to rule alone, possibly leading to months of political wrangling to form a government as U.S. forces draw down.

Electoral officials also blame the delays on the mad scramble to put these elections together after lawmakers waited until the very last minute to pass the law needed to carry out the vote.

"The time given to us was very short. So the presence of complaints and problems here and there does not undermine the process," said electoral commission spokesman Qassim al-Aboudi.

But as the process has drawn out, fraud allegations have increased.

Officials from Allawi's group have said some ballot boxes were thrown in trash bins. They also said some local counting centers failed to post their results as required and that millions of fake ballots were imported from Iran.

Electroal commission officials have said a handful of election workers were fired for entering data too slowly into computers - prompting skepticism from Allawi's supporters.

"You don't fire someone for entering things slowly. You may take them off the terminal, but you don't fire them," said Iraqiya candidate Rend al-Rahim.

Iraqi and international observers, however, say the allegations don't represent a large enough slice of votes to shake the final count.

A Western official in Baghdad with knowledge of the process said nothing has indicated widespread fraud. He spoke on condition of anonymity because he was not authorized to speak to the media.

Three independent Iraqi groups agree. Shams, Tammuz and Al Nazaha monitored the vote with 14,600 observers and have said it was fair.

Peter Galbraith, who served recently as the top-ranking American in the U.N. mission in Kabul, said the Iraqi system has enough checks and balances with rival parties monitoring each other.

Iraqis who've seen it all since the 2003 U.S.-led invasion were embarrassed by the disarray.

"Such delays will shake our confidence in the political process," Baghdad resident Ahmed Ghalid said.

Election officials appeared to have at least learned one lesson. During a Thursday news conference, al-Aboudi's first words were: "We will have enough CDs for everyone today."