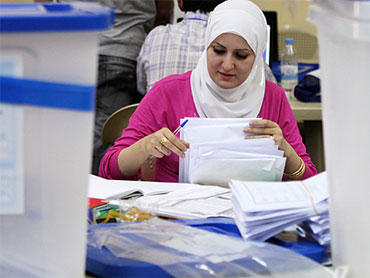 Partial vote results in Iraq's historic election released Thursday showed a tight contest between the nation's prime minister, who had the lead in two provinces in the mainly Shiite south, and a secular challenger who appeared to be drawing on Sunni support north of Baghdad.

The preliminary tallies from five of Iraq's 18 provinces were a setback to hard-line religious Shiite political leaders who have close ties to Iran. But results for the big prize — Baghdad — have yet to be released.

Prime Minister Nouri al-Maliki's bloc was ahead with over a third of the votes counted in the mainly Shiite provinces of Babil and Najaf where his rival Shiite religious coalition had hoped to make gains. The Iraqiya list, which is led by former Prime Minister Ayad Allawi, a secular Shiite, took the lead in the former Sunni insurgent strongholds of Diyala and Salahuddin.

Results from a fifth province, Irbil, were also released showing the Kurdish Alliance, which joins the two main Kurdish parties, beating out the upstart Kurdish party, Gorran, in the self-rule territory.

At stake is the right to guide Iraq's shaky stability as U.S. troops prepare to go home.

The partial results from the Independent High Electoral Commission were released in a chaotic monitoring room in Baghdad and tallies from the rest of the nation were likely to be released over the coming days.

No bloc was expected to gain an outright majority, meaning that those who do well will have to negotiate to form alliances and choose a prime minister. In an effort to cast himself as an inclusive leader for all Iraqis, al-Maliki quit the main Shiite coalition last year to create the State of Law alliance, which includes some Sunni groups.

"These results were expected and it reflects the size of support with our list," said State of Law candidate Sadiq al-Laban in Najaf. "We extend our hands to any bloc that wants to work for a better Iraq."

But al-Maliki appeared to be lagging far behind Allawi's list in the central provinces of Salahuddin, which is mostly Sunni, and Diyala, which has a mixed population of Sunnis, Shiites and Turkomen.

With only 17 percent of the ballots counted — far below the 30 percent threshhold that election officials had said would be the standard for releasing results — Iraqiya had about 55 percent of the vote in Diyala and 60 percent in Salahuddin.

At the election headquarters in Baghdad, scores of journalists jostled for a view of the vote counts as they were posted on big-screen TVs. Election officials appeared overwhelmed by the task of counting and reporting the vote, and seemed to have underestimated how long it would take. The election commission did not post the results on a Web site or make them otherwise accessible to the public, although the state-run TV channel reported the tallies Thursday evening.

Election officials said they had received about 1,000 complaints about the election process so far, although gave no indication as to what the complaints were about.

The Iraqi National Alliance, which is Iraq's top Shiite religious coalition, came in second in both of the southern provinces. The INA is made up of two main political parties — the Supreme Islamic Iraqi Council and the political party led by anti-American cleric Muqtada al-Sadr.

A win in Babil and Najaf provinces would represent an improvement for al-Maliki's coalition over last year's provincial election.

The election news came as al-Maliki's office Thursday announced that the prime minister underwent surgery the day before for what an aide described Thursday as a "simple" procedure. The prime minister has already been released from the hospital and is back at work, the statement said.