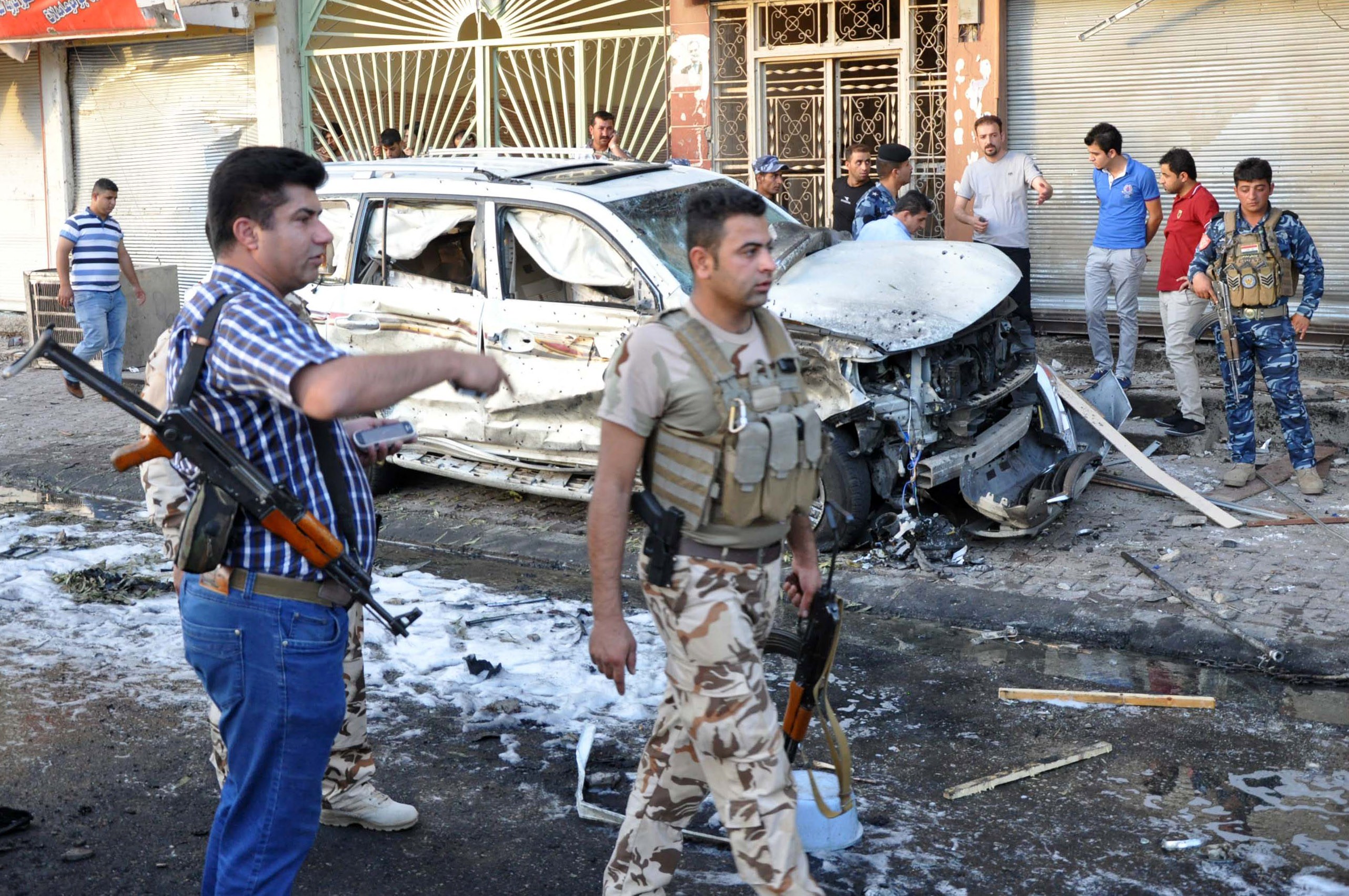 Iraq government and allied forces battled Sunni militants threatening a major military air base in Balad, north of Baghdad, military officials said Wednesday. The militants had advanced into the nearby town of Yathrib, just three miles from the former U.S. base, which was known as Camp Anaconda. The officials insisted the base was not in immediate danger of falling into the hands of the militants.

Underling the persistent danger of Iraq being swept up again by sectarian bloodletting, a suicide bomber blew himself up at an outdoor market in a Shiite area of Mahmoudiya, south of Baghdad on Wednesday, killing 15 people and wounding 30, police and hospital officials said. No one claimed responsibility for the attack, but it bore the hallmarks of Sunni militants who have for years targeted security forces and Shiite civilians.

Earlier Wednesday, Sunni militants launched a dawn raid on a key Iraqi oil refinery they have been trying to take for days, but security forces fought them back, said Col. Ali al-Quraishi, the commander of the Iraqi forces on the scene.

CBS News correspondent Clarissa Ward reported Wednesday that Iraq's army had released new video purportedly showing its forces taking control of the refinery in Baiji -- the country's largest. But Ward said that while the government forces claim to be on the offensive, most of their troops are reinforcing defensive positions around the capital.

A mortar shell also smashed into a house in Jalula, northeast of Baghdad, killing a woman and her two children. That town in the turbulent Diyala province is under the control of Kurdish fighters known as peshmerga.

Also, a report by Iran's semi-official Fars news agency said an attack near Iran's western border with Iraq has killed three Iranian border guards. They were killed Tuesday night while patrolling along the border in western Kermanshah province. A border outpost commander was among the three killed, Fars quoted a local security official, Shahriar Heidari, as saying.

Heidari said an unspecified "terrorist group" was behind the attack but provided no details.

A U.S. official said Wednesday that Iran has been flying surveillance drones in Iraq.

American and Iranian officials have had some direct discussions on the matter, though the Obama administration has ruled out the prospect of direct military involvement. The U.S. is also conducting aerial surveillance over Iraq.

The U.S. officials spoke only on grounds of anonymity because they weren't authorized to discuss the issue publicly.

In the face of militant advances that have virtually erased Iraq's western border with Syria and captured territory on the frontier with Jordan, Prime Minister Nouri al-Maliki's focus has been the defense of Baghdad, a majority Shiite city of 7 million fraught with growing tension. The city's Shiites fear they could be massacred and the revered al-Kazimiyah shrine destroyed if Islamic State fighters capture Baghdad. Sunni residents also fear the extremists, as well as Shiite militiamen in the city, who they worry could turn against them.

The militants have vowed to march to Baghdad and the holy Shiite cities of Najaf and Karbala, a threat that prompted the nation's top Shiite cleric, Grand Ayatollah Ali al-Sistani, to issue an urgent call to arms that has resonated with young Shiite men.

Al-Maliki, who has no military background but gets the final say on major battlefield decisions, has looked to hundreds of thousands of Shiite volunteers who joined the security forces as the best hope to repel the Islamic State's offensive.

While giving the conflict a sectarian slant - the overwhelming majority are Shiites - the volunteers have also been a logistical headache as the army tries to clothe, feed and arm them. Furthermore, their inexperience means they will not be combat ready for weeks, even months.

Still, some were sent straight to battle, with disastrous consequences.

New details about the fight for Tal Afar - the first attempt to retake a major city from the insurgents - underscore the challenges facing the Iraqi security forces.

Dozens of young volunteers disembarked last week at an airstrip near the isolated northern city and headed straight to battle, led by an army unit. The volunteers and the accompanying troops initially staved off advances by the militants, but were soon beaten back, according to military officials.

They took refuge in the airstrip, but the militants shelled the facility so heavily the army unit pulled out, leaving 150 panicking volunteers to fend for themselves, said the officials, who spoke on condition of anonymity because they were not authorized to speak to the media.

The ill-fated expedition - at least 30 volunteers and troops were killed and the rest of the recruits remain stranded at the airstrip - does not bode well for al-Maliki's declared plan to make them the backbone of Iraq's future army.