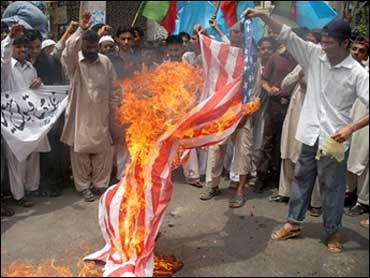 This column was written by Clifford D. May.

Senator and presidential candidate Barack Obama wants to fight al Qaeda in Pakistan — after accepting defeat at the hands of al Qaeda in Iraq. His critics say that shows his inexperience. But he's hardly alone.

A sophisticated member of what may fairly be called the Washington Foreign Policy Establishment was discussing Iraq with me. We agreed on the patterns many Americans are just now beginning to discern within the media clutter: the new American commander in Iraq, Gen. David A. Petraeus, is targeting al Qaeda in Iraq and making progress against that terrorist organization.

But this experienced professional was willing to give the effort only two cheers. "I don't think we need to worry about al Qaeda in Iraq attacking our homeland," he said. "But as for al Qaeda currently located in Pakistan, that's an entirely different matter."

The reconstitution of al Qaeda (AQ) in a remote region of Pakistan is both frustrating and threatening. Frustrating, because we want to bring to justice those responsible for the atrocities carried out six years ago next month. Threatening, because if Osama bin Laden feels safe, we can not.

But is there any basis for the widespread belief that the AQ operation in Pakistan is more dangerous to Americans on American soil than is al Qaeda in Iraq (AQI)? Consider: The most recent National Intelligence Estimate — the collective judgment of the American intel community — makes clear that AQI is AQ's "most visible and capable affiliate, and the only one known to have expressed a desire to attack the [U.S] Homeland." It adds that AQI clearly intends "to plan increased attacks in and outside of Iraq."

AQI carried out these attacks while also overseeing a campaign of murder, torture and suicide-bombing — up to 90 percent of suicide-bombers in Iraq are estimated to be directed by AQI, utilizing terrorists from other countries. (AQI's leadership also is mainly non-Iraqi.)

Can you imagine what AQI will do if American troops withdraw from Iraq too soon, leaving the group in position to resume its slaughter of Iraqis who refuse to submit, and to feed off Iraq's abundant resources? General Michael Hayden, the director of the Central Intelligence Agency, said if the U.S. fails in Iraq, AQ will be likely to achieve its "goal" there — establishing a "safe haven from which then to plan and conduct attacks against the West."

Both AQ and AQI leaders have plainly stated that they consider Iraq the central front in the global conflict they are waging. In an audio message in late 2004, Osama bin Laden said he looked forward to Baghdad becoming the capital of the new "caliphate" — the Islamic empire it is his ambition to resurrect and lead.

Abu Musab al-Zarqawi, who commanded AQI until being killed by U.S. forces in 2006, pledged that his followers would "fight today in Iraq, tomorrow in the land of the Holy Places [Israel], and after there in the West." And in May of this year, Ayman al-Zawahiri, bin Laden's top deputy, spoke in a video of AQ's intention to use Iraq and Afghanistan as "launch pads" for the "establishment of the caliphate."

American Enterprise Institute scholar Fred Kagan points out that in the 1980s, the mujahideen in Afghanistan appeared to represent no threat to anyone except the Soviets. But after forcing the Kremlin to withdraw from Afghanistan, elements of those groups evolved into the Taliban which hosted AQ — which quickly began plotting terrorism against the United States.

Perhaps Sen. Obama and my colleague are correct that al Qaeda in Pakistan is a greater threat to us than is al Qaeda in Iraq. But history, evidence, and logic contradict their belief that we need not worry about AQI coming after us here at home, and their implication that accepting defeat in Iraq will not sharply increase our risks.

We have a choice: We can give Gen. Petraeus and his troops the time and tools they need to continue pursuing al Qaeda in Iraq even as we ponder what to do about al Qaeda in Pakistan. Or we can precipitously withdraw; we can leave AQI alone and cross our fingers.

That would not be a "new course." It would be a return to an approach we've tried before. Too many members of the Foreign Policy Establishment and the political class have apparently forgotten how that turned out. Next month, there will be an anniversary that should remind them.

By Clifford D. May
Reprinted with permission from National Review Online