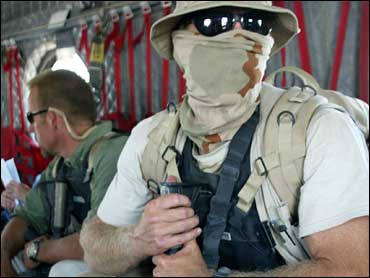 The United States on Tuesday suspended all land travel by U.S. diplomats and other civilian officials in Iraq outside Baghdad's heavily fortified Green Zone, amid mounting public outrage over the alleged killing of civilians by the U.S. Embassy's security provider Blackwater USA.

The move came even as the Iraqi government appeared to back down from statements Monday that it had permanently revoked Blackwater's license and would order its 1,000 personnel to leave the country - depriving American diplomats of security protection essential to operating in Baghdad.

"We are not intending to stop them and revoke their license indefinitely but we do need them to respect the law and the regulation here in Iraq," government spokesman Ali al-Dabbagh told CNN.

The U.S. order confines most American officials to a 3.5 sq. mile area in the center of the city, meaning they cannot visit U.S.-funded construction sites or Iraqi officials elsewhere in the country except by helicopter. The notice did not say when the suspension would expire.

The Iraqi Cabinet decided Tuesday to review the status of all foreign security companies. Still, it was unclear how the dispute would play out, given the government's need to appear resolute in defending national sovereignty while maintaining its relationship with Washington at a time when U.S. public support for the mission is faltering.

Prime Minister Nouri al-Maliki looked to gain political capital from the move against unpopular foreign security contractors. His government said Tuesday it would review the status of all foreign security firms working in the country.

Meanwhile, radical Shiite cleric Muqtada al-Sadr, who wields tremendous influence among regular Iraqis and many politicians despite his militia being one of the most feared in Iraq, called for a ban on all the companies of "the occupiers."

The State Department moved quickly to tamp down anger and possible repercussions after the alleged killings.

Secretary of State Condoleezza Rice telephoned Iraqi Prime Minister Nouri al-Maliki on Monday to express regret at the loss of life and promise that the results of an internal investigation into Sunday's incident would be shared with the government in Baghdad.

"She told the prime minister that we were investigating this incident and wanted to gain a full understanding of what happened," said deputy State Department spokesman Tom Casey. "She reiterated that the United States does everything it can to avoid such loss of life, in contrast to the enemies of the Iraqi people who deliberately target civilians."

Rice and al-Maliki "agreed on the importance of working closely together in the time ahead on a transparent investigation," Casey added.

Yassin Majid, an adviser to Iraq's prime minister, made no mention of the order to expel Blackwater, and it was unlikely the United States would agree to abandon a security company that plays such a critical role in American operations in Iraq.

If carried out, the order would deal a severe blow to U.S. government operations in Iraq by stripping diplomats, engineers, reconstruction officials and others of their security protection and the decision by al-Maliki's government was widely welcomed by Iraqis and likely to give the Shiite leader a political boost.

Also exploiting public rage over the killings of what police said were 11 civilians by Blackwater guards, anti-American cleric Muqtada al-Sadr demanded that the government ban all 48,000 foreign security contractors.

Al-Sadr's office in Najaf said the government should nullify contracts of all foreign security companies, branding them "criminal and intelligence firms."

"This aggression would not have happened had it not been for the presence of the occupiers who brought these companies, most of whose members are criminals and ex-convicts in American and Western prisons," the firebrand cleric said in a statement.

Al-Sadr insisted that the government of Prime Minister Nouri al-Maliki prosecute those involved and ensure that families of the victims receive compensation.

There was no threat by al-Sadr to unleash his Mahdi Army militia in retaliation for the killings.

However, his statement was significant because it signaled al-Sadr's intention to stir up anti-American sentiment in the wake of the weekend shootings and further undermine al-Maliki's U.S.-backed government.

Many Iraqis, who have long viewed security contractors as mercenaries, dismissed Blackwater's contention that its guards were attacked by armed insurgents and returned fire only to protect State Department personnel.

"We see the security firms ... doing whatever they want in the streets. They beat citizens and scorn them," Baghdad resident Halim Mashkoor told AP Television News. "If such a thing happened in America or Britain, would the American president or American citizens accept it?"

Blackwater is among three private security firms employed by the State Department to protect employees in Iraq, and expelling it would create huge problems for U.S. government operations in this country.

In a notice sent to Americans in Iraq, the U.S. Embassy in Baghdad said it had taken the step to review the security of its personnel and possible increased threats to those leaving the Green Zone while accompanied by such security details.

"In light of a serious security incident involving a U.S. embassy protective detail in the Mansour District of Baghdad, the embassy has suspended official U.S. government civilian ground movements outside the International Zone (IZ) and throughout Iraq," the notice said.

"This suspension is in effect in order to assess mission security and procedures, as well as a possible increased threat to personnel traveling with security details outside the International Zone," said the notice, a copy of which was provided to The Associated Press by the State Department in Washington.

The two other firms, both of which are headquartered in the Washington, D.C., suburbs, are Dyncorp, based in Falls Church, Va., and Triple Canopy, based in Herndon, Va. Neither has the resources of Blackwater, which includes a fleet of helicopters that provide added security for State Department personnel traveling through Baghdad's dangerous streets.

In London, Crocker told reporters that "an investigation of that incident is under way and it would be premature to comment until the investigation is finished."

Unlike many deaths blamed on foreign contractors, Sunday's shootings took place in a crowded area in downtown Baghdad with dozens of witnesses. Even so, details of the incident remain unclear.

The incident drew attention to one of the controversial American practices of the war - the use of heavily armed private security contractors who Iraqis complain operate beyond the control of U.S. military and Iraqi law.