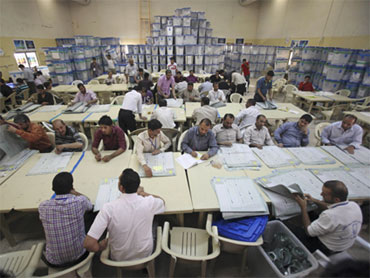 A coalition led by Iraqi Prime Minister Nouri al-Maliki was winning in the all-important capital, according to a partial tally of results released Saturday.

If the trend continues, the vote tallies would be a substantial boost to al-Maliki and his chances to regain the prime minister's office. Baghdad accounts for 70 of the parliament's 325 seats and would go a long way toward deciding who will be tasked with forming a government which will oversee the country as U.S. forces go home.

Al-Maliki has been leading so far in preliminary results that have been trickling out from election officials since last Sunday's election. With the partial Baghdad results, the prime minister is now leading in eight provinces compared to two for his secular challenger Ayad Allawi, the leader of the Iraqiya coalition, and one for the Iraqi National Alliance, a Shiite religious coalition with ties to Iran. A Kurdish coalition, as expected, is ahead in Irbil in northern Iraq's autonomous Kurdish region.

The partial Baghdad results show al-Maliki's State of Law coalition with almost 159,000 votes compared to about 108,000 for the INA. Allawi's Iraqiya coalition was in third with about 105,000 votes.

It was not clear which of the capital's neighborhoods were included in the count and whether they were coming from across Baghdad, from the Shiite-dominated eastern part of the city or the Sunni-dominated western neighborhoods.

It was also not clear exactly what percentage of the votes had been counted so far.

The Independent High Electoral Commission has struggled to release the election results in an organized fashion, and Saturday's tally was no exception.

The partial results were posted, and then pulled minutes later. A quarrel then immediately broke out between election officials before a commission spokeswoman, Gulshan Kamal Ali, confirmed the results were accurate.
By Associated Press Writer Ben Hubbard