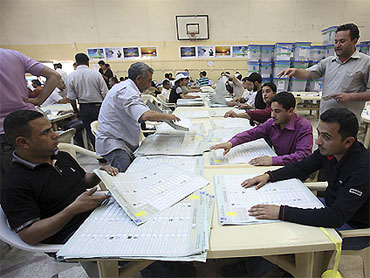 The Iraqi prime minister's bloc said Friday it has started laying the groundwork to form a coalition government, signaling growing confidence after preliminary election results showed it winning in at least three provinces in the southern Shiite heartland.

But the outcome from the key parliamentary vote was far from certain, with election officials still counting ballots nearly a week after Iraqis went to the polls.

Partial tallies so far have been released from seven of Iraq's 18 provinces, excluding all-important Baghdad, which accounts for almost a fifth of the 325-seat parliament. The picture was further muddied Friday when the latest results showed an Iran-backed Shiite religious coalition leading in one province and al-Maliki in another.

Al-Maliki's rivals also raised new allegations of fraud, which could mar the process that will determine who will lead the country as U.S. forces prepare to go home.

According to early results released Thursday, the State of Law coalition led by al-Maliki had the lead in two mainly Shiite provinces - Babil and Najaf - while his secular challenger, Ayad Allawi, was ahead in two provinces in central Iraq - Salahuddin and Diyala.

More results trickled out Friday in what has been a chaotic process in which election officials have posted tallies on TV screens at their Baghdad headquarters with little advance notice.

The electoral commission said Friday that the Iraqi National Alliance, a Shiite religious coalition made up of the Supreme Islamic Iraqi Council and followers of anti-American cleric Muqtada al-Sadr, had the lead over al-Maliki in Maysan province, which borders Iran.

Results released later for Muthanna province, which borders Saudi Arabia to the south, showed al-Maliki's coalition with about 15,000 votes to roughly 11,000 for the Iraqi National Alliance. Allawi's coalition, which was not expected to seriously contend in the Shiite south, came in a distant fourth with 18 percent of the votes counted.

However, Iraqi officials who have seen results from across the country said al-Maliki's coalition appeared to have a narrow edge overall, though not an outright majority. Even the head of the Supreme Islamic Iraqi Council, Ammar al-Hakim, said late Wednesday that al-Maliki's coalition appears to be winning - the first public statement by such a high-ranking official. However, al-Hakim contended that his coalition - the INA - was in second, not Allawi's Iraqiya.

So far, al-Maliki is winning overall in the country with about 179,000 votes, compared with roughly 160,000 for the INA and 124,000 for Iraqiya. Those results reflected the fact that a greater number of ballots had been counted in Shiite strongholds such as Najaf and Babil than had been counted in areas were Allawi was ahead.

Abbas al-Bayati, a member of al-Maliki's coalition, said Friday that the alliance already had created a committee to open talks with other blocs and expected that the group would need about two or three other coalitions to form a government.

"The initial results of elections indicated our progress ... we can form a government by allying with two or three coalitions. We have high votes in Baghdad and most of the southern provinces. We formed a mini-committee to open dialogue with other blocs," he said.

Among the meetings being scheduled with rivals is one with the INA, according to an al-Maliki adviser who spoke on condition of anonymity due to the sensitivity of the talks.

"Al-Maliki basically has two big choices - does he reach out to INA, which I think is easier, and it looks as though they are weaker. Or does he go to Allawi?" said Toby Dodge from the International Institute for Strategic Studies in London.

But finding allies with whom to form a coalition may be difficult for the Iraqi prime minister, who has created enemies right and left during his almost four years in office. Many Shiites oppose him, saying that he split the Shiite vote by breaking off from the Shiite alliance that dominated the December 2005 election to form the State of Law coalition.

He's alienated the Kurds - a crucial linchpin to forming any government in Iraq - after his government clashed with their desire to have more control over their oil resources and because he's rebuffed their efforts to gain control over the disputed city of Kirkuk.

And questions over who would get the prime minister's slot and the vicious nature of the campaign in which Allawi repeatedly attacked al-Maliki mean a coalition with Iraqiya would be difficult.

Foes of al-Maliki continued to allege fraud in the vote.

Rend al-Rahim, a candidate with Allawi's Iraqiya coalition, said Friday that the group had filed 32 complaints with election officials as of Thursday night. She said concerns included completed ballots that had been found in the garbage and the failure of some provinces to deliver ballot boxes to the counting center in Baghdad.

"We have no idea the extent of this. There is no way you can tell," she said, adding that it was not clear if the alleged fraud targeted Iraqiya exclusively or other political blocs as well.