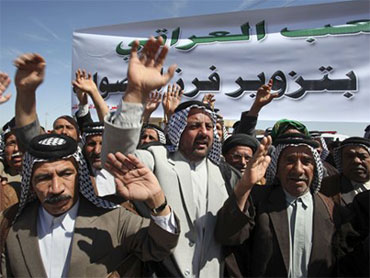 Iraq's president on Sunday called for a recount in this month's parliamentary elections, which have turned into a tight race between the prime minister and a secular rival amid accusations of fraud. A new count could further extend political wrangling in the contentious race.

The demand from President Jalal Talabani came a day after Iraqi prime minister Nouri al-Maliki appeared to back the idea by calling on the election commission overseeing the counting to quickly respond to requests from political blocs for a recount.

The demands are the latest twist to an election that will determine who will govern the country as U.S. troops go home. Counting since the March 7 vote has been slow and plagued with confusion and disarray, fueling claims of fraud, though international observers have said the vote and count have been fair.

It remained unclear what the demands from Talabani and al-Maliki, which come before the first count has been finished, would produce.

The electoral commission - an independent body appointed by parliament - swiftly dismissed the calls and urged political parties to be patient and lodge their complaints through the appropriate channels.

"It is not possible that a political entity, which believes there might have been a mistake at a particular polling station, can demand a manual recount for an entire city or for the whole of Iraq," said commission chief, Faraj al-Haidari.

Talabani demanded in a statement on his official Web site Sunday an immediate recount to "preclude any doubt and misunderstanding" about the results. He said he was making the demand "as the president of the state, authorized to preserve the constitution and to ensure justice and absolute transparency."

Al-Maliki, whose bloc is among those seeking a recount, issued a statement late Saturday calling on the commission to respond to the demands, saying that doing so quickly would "protect the democratic experiment and maintain the credibility of elections."

However, al-Maliki is still winning in seven of Iraq's 18 provinces, which is significant because seats in the 325-member parliament are allotted based on the outcome of voting in each province.

Both Allawi's Iraqiya list and al-Maliki's State of Law coalition have alleged fraud in the counting - though many blocs' claims have sometimes appeared to reflect how well they are doing in the tally.

Al-Haidari, the commission chief, said any political bloc "can feel it was cheated at this polling station or that."

"But to launch unconfirmed accusations against the commission does not serve either the person behind such statements or the election and the political process," he said.

Al-Haidari said results of a 100 percent count would be released Friday evening. He did not explain why it would take so long to count the few remaining votes.

Once a final tally is in, election results will still have to be certified by the Supreme Court after all complaints have been reviewed, which could take weeks.

Maysoun al-Damlouji, a spokeswoman for Allawi's bloc, said neither al-Maliki nor Talabani have the authority to order a recount. She urged the prime minister "not to use his influence to change" the election results.

"There are well-known, legal ways to appeal election results," she said. "I hope that all will accept the election outcome in a spirit of good sportsmanship."

This is the first time Talabani, a Kurd, has weighed in on the counting process. His party, the Patriotic Union of Kurdistan, has been under heavy pressure from a new political party on the Kurdish scene, Gorran, which has been making inroads in the Kurdish province Sulaimaniyah, once a PUK stronghold.

Moreover, results so far have shown that the Kurdish Alliance, composed of the PUK and the other main Kurdish political party, is narrowly losing to Iraqiya in the key Tamim province in the north. The province is home to the oil-rich city of Kirkuk, which is claimed by both Arabs and Kurds. A win for Iraqiya would be a blow for Kurdish claims on the city.

Al-Maliki's bloc earlier this week accused the electoral commission's counting center of doctoring the numbers and demanded a recount.

Also Sunday, governors from nine Shiite heartland provinces in the country's south and Baghdad backed the calls for a recount. As they met in the holy city of Najaf, hundreds of residents protested outside government offices, demanding a manual recount and carrying banners saying "No to stealing our votes."