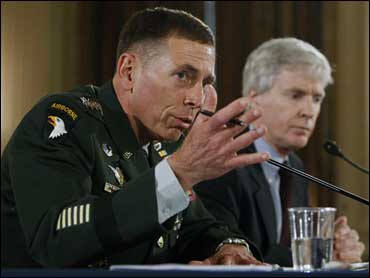 Gen. David Petraeus told Congress on Monday he envisions the withdrawal of roughly 30,000 U.S. troops by next summer, beginning with a Marine contingent later this month.

In long-awaited testimony, the commanding general of the war said last winter's buildup in U.S. troops had met its military objectives "in large measure."

As a result, he told a congressional hearing and a nationwide television audience, "I believe that we will be able to reduce our forces to the pre-surge level ... by next summer without jeopardizing the security gains we have fought so hard to achieve."

Petraeus unleashed a volley of numbers to support his claim the surge is working, reports CBS News national security correspondent David Martin. He said the number of attacks in Iraq is lower than at any time in more than a year; civilian deaths are down by 45 percent; and sectarian killings are down by 55 percent.

But the charts show violence is still high, running at levels comparable to 2005, before the bombing of the Samarra mosque triggered sectarian fighting that nearly tore Iraq apart, adds Martin.

Testifying in a military uniform bearing four general's stars and a chestful of medals, Petraeus said he had already provided his views to the military chain of command.

Rebutting charges that he was merely doing the White House's bidding, he said firmly, "I wrote this testimony myself. It has not been cleared by nor shared with anyone in the Pentagon, the White House or the Congress."

Petraeus' testimony came at a pivotal moment in the war, with the Democratic-controlled Congress pressing for troop withdrawals and the Bush administration hoping to prevent wholesale Republican defections.

Crocker said 2006 was a "bad year for Iraq. The country came close to unraveling politically, economically and in security terms. 2007 has brought improvement."

But Crocker, evaluating Iraq's ability to govern itself, the ultimate goal of the surge, has a lot fewer success stories to point to than Petreaus, reports CBS News chief White House correspondent Jim Axelrod, with a paralyzed parliament unable so far to pass major laws that would foster Sunni-Shiite reconciliation.

"I do believe that Iraq's leaders have the will to tackle the countries pressing problems, although it will take longer than we originally anticipated," said Crocker.

Mr. Bush and his political allies have worked forcefully in recent weeks to shore up Republican support. One organization with ties to the administration has spent millions on television advertisements, and Mr. Bush traveled to Anbar province last week to highlight improved security in the vast western stretches of Iraq.

Mr. Bush also called Iraqi Prime Minister Nouri al-Maliki in the hours before Petraeus spoke, and is expected to deliver a nationwide address on the war in the next few days.

Mr. Bush has urged lawmakers to listen to Petraeus with an open mind, but CBS News correspondent Chip Reid reports many influential Democrats said they already know what he's going to say and have already rejected it.

"The president's policy as well as his surge are not working," Sen. Joe Biden, D-Del., told CBS News. "The policy was to build up the Iraqi army so we could stand down. It's an abject failure."

Petraeus said that a unit of about 2,000 Marines will depart Iraq later this month, beginning a drawdown that would be followed in mid-December with the departure of an Army brigade numbering 3,500 to 4,000 soldiers.

After that, another four brigades would be withdrawn by July 2008, he said. That would leave the United States with about 130,000 troops in Iraq, roughly the number stationed there last winter when President Bush decided to dispatch additional forces.

He said he believes withdrawals could continue even after the 30,000 extra troops go home, but added that it would be premature to make any further recommendations.

Initial reaction from Democrats was sour.

Rep. Tom Lantos, D-Calif., chairman of the House Foreign Affairs Committee, said it was a "token withdrawal," and Petraeus rebutted him swiftly.

"A very substantial withdrawal," he countered.

The extent of any improvement in Iraq has been a matter of debate. The Government Accountability Office, a congressional agency, recently reported that Iraq has partially achieved only four of 18 political and military goals.

While Petraeus focused his remarks mostly on military matters, he also noted the failure thus far of the Iraqi government to take the actions needed to stabilize the country for the long term.

Using 13 pages of colorful charts, Petraeus conceded that the military gains have been uneven in the months since Bush ordered the buildup last winter.

But he also said that there has been an overall decline in violence and said, "the level of security incidents has declined in eight of the past 12 weeks, with the level of incidents in the past two weeks the lowest since June of 2006."

Petraeus also said the Iraqi military is slowly gaining competence and gradually "taking on more responsibility for their security."

He cited Anbar province as an example of Iraqis turning against terrorists, adding, "We are seeing similar actions in other locations as well."

Nevertheless, fresh polls reflected significant public opposition to the war. A USA Today-Gallup poll taken in the past few days found that 60 percent of those surveyed favor setting a timetable for removing troops. Only 35 percent favor keeping the troops in Iraq until the situation improves.

Another poll released Monday shows that an overwhelming number of Iraqis say the U.S. troop buildup has worsened security and the prospects for economic and political progress in their country.

Forty-seven percent of those surveyed in a poll conducted by ABC News, Britain's BBC, and Japan's public broadcaster NHK said they want American forces and their coalition allies to leave the country immediately. This was 12 percent more people than harbored those views in a March poll, just as the troop increase was beginning. And 57 percent, including nearly all Sunnis and half of Shiites, said they consider attacks on coalition forces acceptable, a slight increase over the past half year.

Petraeus and Ambassador Ryan Crocker were the only witnesses at a nationally televised hearing punctuated by numerous protests by anti-war demonstrators.

Over and over, Rep. Ike Skelton, the Missouri Democrat presiding, ordered police to remove the demonstrators. "This is intolerable," he said at one point.

Skelton and fellow lawmakers spoke first, as is customary in Congress, and Petraeus listened to more than 45 minutes of political rhetoric. His testimony was delayed another 10 minutes by a malfunctioning microphone, but when he began to speak, the lawmakers arrayed on the dias across from him listened intently.

Crocker followed Petraeus to the microphone, and employed some of the most stark rhetoric of the hearing.

Saying al Qaeda had "overplayed its hand" in Anbar province, he said, "Anbaris began to reject its excesses, be they beheading school children or cutting off people's fingers for smoking."

Skelton, a moderate Midwesterner and chairman of the House Armed Services Committee, welcomed Petraeus to hearing with wistful words of praise.

Petraeus is "almost certainly the right man for the job in Iraq, but he's the right person three years too late and 250,000 troops short," he said.

Petraeus and Crocker listened quietly at the witness table as Skelton called on them to "tell us why we should continue sending our young men and women to fight and die if the Iraqis won't make the tough sacrifices leading to reconciliation."

"....Are we merely beating a dead horse?" the congressman asked.

The war is in its fifth year, and has claimed the lives of more than 3,700 U.S. troops.

"Cooking the books for the White House," charged the newspaper advertisement by MoveOn.Org, an allegation that Republicans swiftly challenged Democrats to disavow.

"These childish tactics are an insult to everyone fighting for our freedom in Iraq, and they should be condemned," said Sen. Mitch McConnell of Kentucky, the Republican leader.

Nearly two dozen senators, all Republicans except for Sen. Joseph Lieberman, an independent from Connecticut, called for Democrats to denounce the advertisement.

The appearance of Petraeus, more than Crocker, took on outsized importance. As both the architect and the commander of last winter's shift in strategy, he has won praise from lawmakers in both parties, and opinion polls show he has more credibility with the public on the war than Bush.

Democrats have been critical of Petraeus, but not nearly as scathing - or as personal - as the MoveOn advertisement.

"General Petraeus or General Betray Us?" it asked, a wordplay on his name.