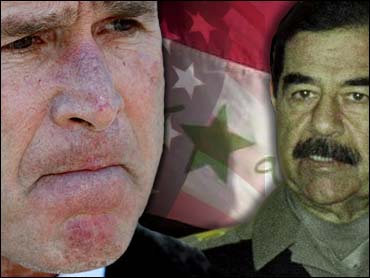 A new U.S. draft resolution on Iraq set off a final diplomatic push for tough new weapons inspections, backed by threats of force if Saddam Hussein continues to skirt his disarmament obligations.

The revised American text, a product of eight weeks of intense lobbying by the Bush administration, signaled significant progress and included major concessions to Security Council members concerned about setting off another war in Iraq.

Still, France and Russia prepared to pick apart certain sections during consultations in the council Thursday. While the revised draft includes a greater role for the Security Council, it still frees the U.S. to take military action against Iraq if inspectors say it isn't complying.

French President Jacques Chirac and Russia's Vladimir Putin believe the text still contains "ambiguities" which could be used to trigger an attack on Iraq, Chirac's spokeswoman said. Nonetheless, both leaders saw "many improvements" in the new proposal, Catherine Colonna said.

White House spokesman Sean McCormack said "both leaders agreed on the need to reach agreement on a strong new resolution that could lead to peaceful disarmament of Iraq through cooperation with the United Nations" and international inspectors.

He reported no assurances from Putin on the matter, or whether Mr. Bush liked what he heard.

In Iraq, the government-controlled media called the draft resolution a pretext for war against Baghdad and urged the Security Council not to bow to American demands.

U.S. Ambassador John Negroponte, who officially submitted the draft's text Wednesday, said it could be put to a vote on Friday and "deserves consensus support."

Although White House officials expect the Friday vote, they have been careful to avoid setting an ultimatum.

"It's coming to a close and it's time for the United Nations to move forward," said White House spokesman Scott McClellan, adding that "consultations are ongoing."

A Friday vote would give Iraq until Nov. 15 to accept the resolution's terms and could put an advance team of inspectors on the ground - for the first time in nearly four years - by the end of the month.

According to a strict timeline in the resolution, inspectors would have up to 45 days to actually begin work, and must report to the council 60 days later on Iraq's performance. In the meantime, any Iraqi obstructions or noncompliance would be reported immediately to the council for assessment.

At the same time, it offers Iraq the possibility of lifting a decade of crippling sanctions if it complies fully with its obligations.

The U.S. ambassador acknowledged that some work remained on the text but made clear that it was now the endgame for the U.S.

But whether Washington can get all 15 council members on board remains to be seen.

For a resolution to be adopted, it needs at least nine "yes" votes and no veto by permanent members Russia, France, China, Britain and the United States.

None of the five are likely to veto, though an abstention from Russia, France or China could hurt some of the resolution's credibility. U.N. Secretary-General Kofi Annan has said the way to send a strong message to Iraq is through council unity.

Still, Syria, Iraq's Arab neighbor, remains opposed to any new resolution. Norway, Colombia and Bulgaria appear to be on board with the United States while Mexico and Singapore said the draft was being studied by their governments.

On Thursday, China's Foreign Ministry said it had noted improvements in the new U.S. draft resolution, but wouldn't say whether China would endorse it.

"On the whole, we believe the new resolution takes into consideration some of the concerns and worries of other countries," spokesman Kong Quan said at a media briefing.

Kong also said China will use its monthlong turn as rotating president of the Security Council to push for consensus on a new Iraq resolution. It heads the council in November.

Instead, he noted that Mr. Bush believes "the use of force, war, would be a last resort. He wants to give the United Nations and the Security Council a chance."

Negotiations for a new Iraq resolution began after Mr. Bush's Sept. 12 speech to the U.N. General Assembly where he challenged world leaders to get tough with a derelict Iraq or stand aside as the U.S. acted.

The speech was soon followed by a toughly worded draft resolution that went through several major revisions to address opposition from council members and inspectors.

The latest version softens one reference to Iraq being in "material breach" of its obligations to disarm under a decade of U.N. resolutions in place since the 1991 Persian Gulf War. But a second reference still bothers Russia and France, which believe the legal term could be used to justify war.

Secretary of State Colin Powell has spent the week on the phone discussing the text with his French, British and Russian counterparts.

A cornerstone of the U.S. proposal is a tough new inspections regime responsible for hunting for illicit weapons and reporting on any Iraqi failures to comply with its disarmament obligations.

It requires Iraq to provide inspectors with "immediate, unimpeded, unconditional, and unrestricted access to any and all" areas, including eight presidential sites, where advance notice was previously needed for inspections.

Inspectors can also decide whether to interview Iraqi scientists and government officials outside the country.