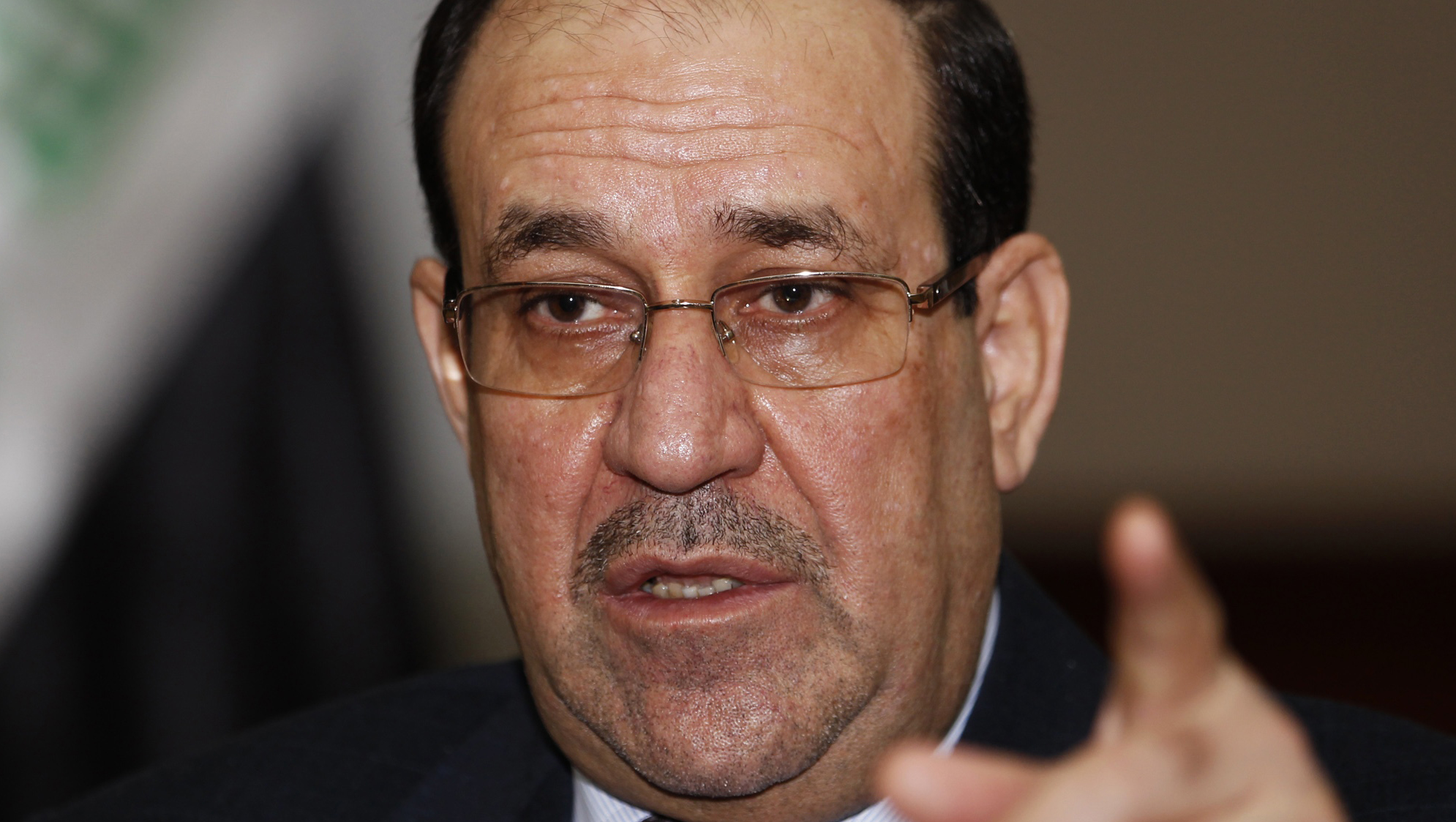 BAGHDAD -- The spiritual leader of Iraq's Shiite majority called for a new, "effective" government Friday, increasing pressure on the country's prime minister as an offensive by Sunni militants rages on.

Grand Ayatollah Ali al-Sistani's comments at Friday prayers contained thinly veiled criticism that Shiite Prime Minister Nouri al-Maliki, in office since 2006, was to blame for the nation's crisis over the blitz by the al Qaeda-inspired Islamic State of Iraq and Syria (ISIS).

While al-Maliki's State of Law bloc won the most seats in parliament in the Iraq's April 30 election, he now faces opponents bolstered by criticism Thursday from President Obama.

And with Iraq now asking the U.S. for airstrikes to temper the militants' advance -- especially as they apparently prepared Friday to again assault the country's biggest oil refinery -- al-Maliki appears increasingly vulnerable.

"It is necessary for the winning political blocs to start a dialogue that yields an effective government that enjoys broad national support, avoids past mistakes and opens new horizons toward a better future for all Iraqis," al-Sisanti said in a message delivered by his representative Ahmed al-Safi in the holy city of Karbala.

The Iranian-born al-Sistani, who is believed to be 86, lives in the holy city of Najaf south of Baghdad. A recluse, he rarely ventures out of his home and does not give interviews. Iraq's Shiites deeply revere him and a call to arms he made last week prompted thousands of Shiites to volunteer to fight against the Islamic State.

Al-Sistani's call to arms has given the fight against the Islamic State militants the feel of a religious war between Shiites and Sunnis. His office in Najaf dismissed that charge and al-Safi on Friday said: "The call for volunteers targeted Iraqis from all groups and sects. ... It did not have a sectarian basis and cannot be."

Al-Maliki has been seeking to place the blame for chaos in Iraq on the Islamic State and not his perceived exclusion of the Sunnis. However, questions persist on how much support, if any, the Islamic State enjoy among the Sunni population in areas they control.

"You can't rely on him," the tribal leader told CBS News' Clarissa Ward. "U.S. policy cannot rely on a paralyzed man who has lost control of Iraq, when he is the one who took Iraq to this point."

Using the common Arabic acronym for the Islamic State, he told The Associated Press on Thursday: "Daash themselves know that the tribes will push them out. ... There can't be any trust given to Daash."

Another Shiite cleric, Nassir al-Saedi, warned that the 300 U.S. military advisers Obama plans to send to Iraq would be attacked. Al-Saedi is loyal to anti-U.S. cleric Muqtada al-Sadr, whose Mahdi Army militia fought the Americans in at least two rounds of street warfare during their eight-year presence in Iraq.

"Our message to the occupier: ... We will be ready for you if you are back," he told a Friday sermon attended by al-Sadr supporters in Baghdad's Sadr City district.

Less than three years after Obama heralded the end of America's war in Iraq, he insisted Thursday in a White House address he was not sending the military back into combat. Still, when coupled with previously announced steps, the president's actions could put about 600 additional U.S. troops in the midst of Iraq's deeply unstable security situation.

Despite the deteriorating conditions, Obama has held off approving airstrikes that the Iraqi government has sought to stem an insurgency that has taken over the cities of Mosul and Tikrit and has pressed toward Baghdad. The president said he could still approve "targeted and precise" strikes if the situation on the ground required it, noting that the U.S. had stepped up intelligence gathering in Iraq to help identify potential targets.

Al-Maliki's Shiite-led government long has faced criticism of discriminating against Iraq's Sunni and Kurdish populations. But it is his perceived marginalization of the once-dominant Sunnis that sparked recent violence reminiscent of Iraq's darkest years of sectarian warfare after the 2003 U.S.-led invasion.

CBS News' Ward said Friday on "CBS This Morning" that al-Maliki's only strategy to counter the threat from ISIS thus far appears to have been to re-mobilize the Shiite militias who fought against Sunni factions at the height of the country's sectarian violence between 2006 and 2008 - which has only fanned the flames of sectarian conflict.

Iraq's newly elected parliament must meet by June 30 to elect a speaker and a new president, who in turn will ask the leader of the largest bloc to form a new government.

With Iraq in turmoil, al-Maliki's rivals have mounted a campaign to force him out of office, with some angling for support from Western backers and regional heavyweights. On Thursday, their effort received a massive boost from Obama, who said: "Only leaders that can govern with an inclusive agenda are going to be able to truly bring the Iraqi people together and help them through this crisis."

An "inclusive agenda" has not been high on the priorities of al-Maliki, however. Many of al-Maliki's former Kurdish and Shiite allies have been clamoring to deny the prime minister a third term in office, charging that he has excluded them from a narrow decision-making circle of close confidants.

Al-Maliki's efforts last year to crush protests by Sunnis complaining of discrimination under his Shiite-led government sparked a new wave of violence by militants, who took over the city of Fallujah in the western, Sunni-dominated province of Anbar and parts of the provincial capital, Ramadi. Iraqi army and police forces battling them for months have been unable to take most areas back.

At the same time, many Iraqis complain of government corruption, the failure to rebuild the economy and too close ties with mostly Shiite Iran, a non-Arab nation that Sunni Arab states, including powerhouse Saudi Arabia, see as a threat to regional stability.