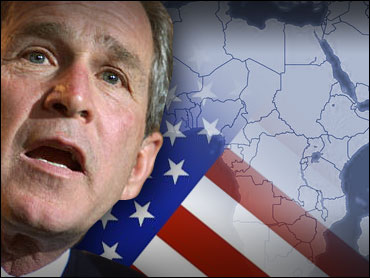 
The White House traveling road show is in the middle of a rare presidential trip to Africa, putting the U.S. foreign policy spotlight on a continent that has become accustomed to receiving far too little attention from Washington.

President George W. Bush's hope was to focus on several countries which are success stories and tout his administration's attempts to foster stronger economic ties and take steps to fight HIV/AIDS, a disease which is taking a devastating toll on millions of people all across sub-Saharan Africa.

The trip is proceeding country to country, event to event, all of the well-planned photo ops occurring on schedule. The president is seen on Goree Island, Senegal, departure point for thousands of Africans on their way to a life as slaves in America; a press conference in South Africa is held with a grass hut as backdrop; Mr. Bush and his party watch tribal dancers.

Secretary of State Colin Powell strongly defended the basic purposes of the trip. "We're not here for style, we're here for substance. We have a solid agenda," Powell told reporters, "that talks about aid and trade."

There are just a couple of nagging problems. The war in Iraq and the reasons used to justify it keep coming up when reporters have a chance to ask questions, effectively shifting the spotlight from its intended focus. With American soldiers in Iraq dying on a daily basis, and with Congressional hearings questioning the very basis for the war, there tends to be less interest in hearing the details of the administration's proposed $15 billion effort to halt the spread of HIV/AIDS. (And when that subject does come up it's pointed out that Congress has not yet given the administration all it has asked for.)

Even other events on the continent have forced the president and his top advisers, Powell and National Security Adviser Condoleezza Rice, to juggle the trip's planned script with its real one.

Everywhere the traveling road show goes reporters ask about Liberia, its leader Charles Taylor and when he will depart his war-torn country. Taylor has said many times he's willing to leave, but Liberia is in such a state of chaos not even the Bush administration wants him to depart before an international peacekeeping force arrives to restore and maintain order. "The preference would be for Taylor to leave about the time ECOWAS (Economic Community of West African States) forces arrive," Powell said at a news conference in Botswana.

Other issues also intrude. Many African leaders disagree with Mr. Bush's Iraq policy and openly opposed the war. There are also strong differences over the use of genetically modified foods, which U.S. agribusiness wants to export to the continent.

Mr. Bush's visit to five countries – Senegal, South Africa, Botswana, Uganda and Nigeria – is important, but its success will be diminished because of these constant distractions. In politics, it's called going off-message. Distractions are not new to such trips; they are, in fact, a constant in any presidency and they simply need to be dealt with.

The pity is that the presidential spotlight shines so seldom on African nations and their problems need all the high-level attention they can get. Yes, the administration will continue to address HIV/AIDS; and yes, trade will increase.

But soon the trip will be over and the White House will move its spotlight to other issues such as unemployment and taxes, leaving the problems of Africa to be managed by lower echelons in the administration. And notwithstanding Secretary Powell's claim that "the purpose of this trip is not a political exercise," the next time you're likely to see Mr. Bush in Africa will probably be on videotape taken during this trip and used in television ads for next year's re-election campaign, as Republicans reach out to gain the votes of African Americans.

As for Africa, its struggles will continue, virtually all of them uphill battles.